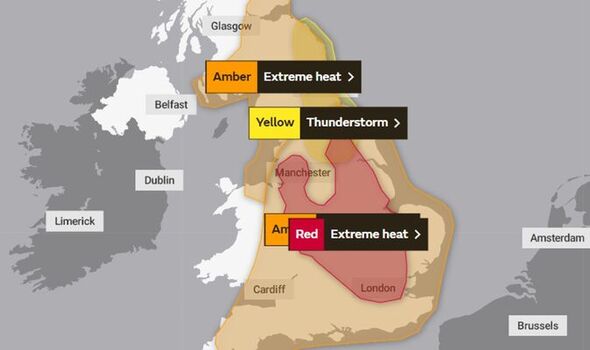 The forecasted thunderstorms could bring disruption this afternoon from lightning strikes and strong, gusty winds.

Met Office warned that under such conditions, buildings and structures can be damaged and power supplies may be interrupted by the lightning strikes.

Sudden strong and gusty winds may also cause damage to temporary structures, with a small chance of flying debris.

There is also a small chance that lightning strikes could trigger wildfires which could cause damage to infrastructure and property.

The extremely high temperatures roasting the country are unprecedented, with a new provisional UK record temperature of 40.3C recorded today at Coningsby, in Lincolnshire, according to the Met Office.

Mr Dale explained that this is linked to the high levels of humidity that could come along with the record-breaking temperatures.

Mr Dale told Express.co.uk: “Given the fact that we’re going to see temperatures knocking on the door of the UK record, there’s every chance that the breakdown might produce severe weather.

“Monday and Tuesday look very humid and that’s when thunderstorms will start breaking out sporadically across France – some of those will arguably move into Britain.

“England and southern Wales will be affected, with the south coast being the first main hit.”

Speaking of the phenomena that this breakdown could bring, he added: “With thunderstorms can come lightning, gusty winds, hail, torrential downpours, and even tornadoes.”

Today’s yellow warning is in place from 4pm to 8pm and affects the regions:

Another warning is issued for tomorrow, Wednesday, from 1pm to 9pm, affecting the following regions: