The Met Office has issued warnigs for snow and ice for Wednesday and Thursday predicting up to an inch (2cm) of snow to fall in parts of the country. Large swathes of the country are facing dangerous ice on surfaces and snowfall causing travel chaos.

The Met Office issued two yellow weather warnings on Tuesday, the first for snow and ice and the second for ice.

The snow and ice weather warning is in effect from 9pm on Wednesday to 10am on Thursday.

The warning reads: “Ice and snow may bring some travel disruption from Wednesday evening through Thursday morning.”

The weather forecaster advises: “Showers are expected across the northwest of the UK from Wednesday evening onwards, these falling as sleet and snow even to low levels at times away from exposed coasts.

“Some accumulations of snow are expected, mostly above around 150m where more than 2cm is likely in places.

“In addition an area of rain will move across parts of southern Scotland and northern England on Wednesday evening, again with some snow possible but this mostly above 200m.

“Surfaces will remain wet from this rain and the showers with icy stretches expected to form.”

The snow and ice is expected to cause delays on roads and railways and could lead to injuries from slips and falls on icy surfaces. 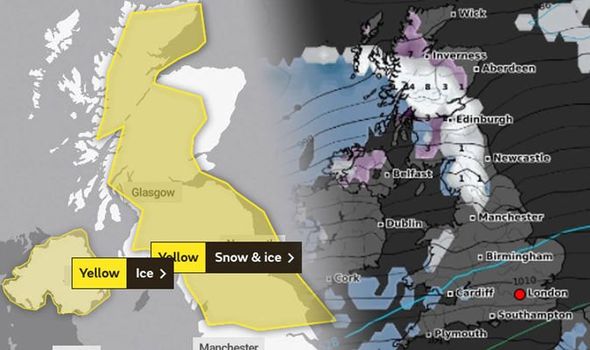 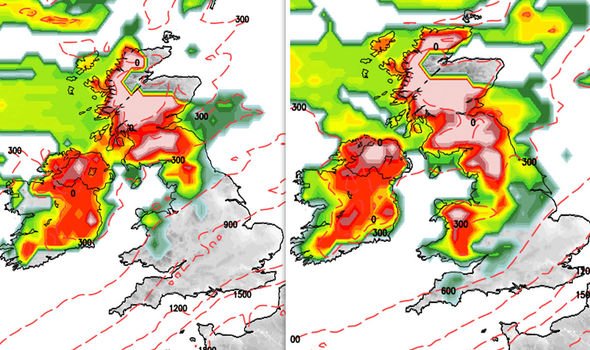 Predominantly, Scotland and northern England will see the snow and ice on Wednesday night through to Thursday morning.

The affected regions will be: 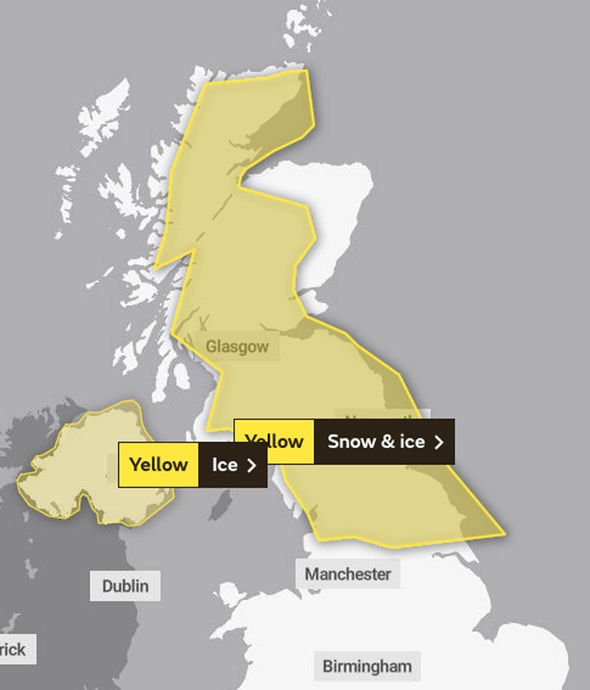 The Met Office’s second warning for ice covers all of Northern Ireland.

The warning advises of icy stretches which may lead to some travel disruption from Wednesday evening through to Thursday morning.

The weather forecaster’s warning reads: “Some rain is expected over the east of Northern Ireland on Wednesday evening before showers in the west spread across the country.

“These will leave surfaces wet with icy stretches likely to form overnight.

“Some sleet and snow is likely in the showers as well though any accumulations are expected to be small.”

DON’T MISS
UK snow forecast: Shock map shows heavy snow to hit Britain [INSIGHT]
Met Office warnings: MONTH’S worth of rainfall in a DAY [FORECAST]
London snow: When will it snow in London? Will it snow near me? [EXPLAINER]

Weather forecaster Netweather’s snow risk map reveals large swathes of the UK facing a high risk of snow from 9pm on Wednesday through to 3am on Thursday.

Other regions such as Wales and the Midlands have up to a 80 percent risk of snow. 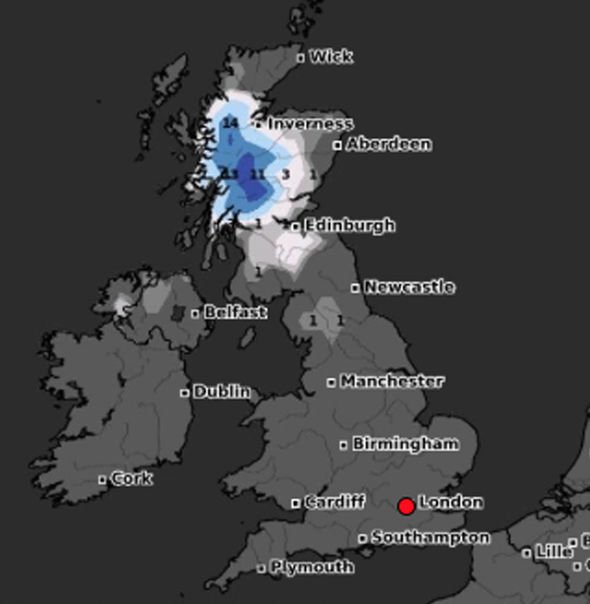 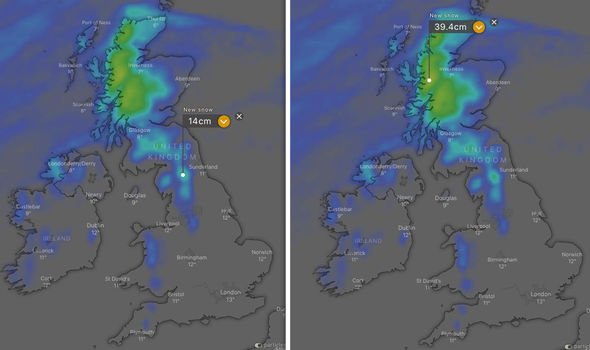 According to Windy.com, over the course of the next three days, parts of the Scottish Highlands could see up to 15.5 inches (39.4cm) of snowfall.

Parts of northern England could see up to 5.5 inches (14cm) worth of new snow.

However, WX Charts believes the Scottish Highlands is more likely to see around 5.1 inches (13cm) by the early hours of Thursday.

Northern parts of England will meanwhile see around half an inch (1cm) of snowfall on Thursday morning.

The snow this week will not be the last of the snow either according to the Met Office.

The weather forecaster’s prediction for March 14 to 23 reads: “Staying unsettled at first with longer spells of rain and scattered showers interspersed with bright or sunny interludes.

“Across the north, some sleet or snow at times especially over higher ground. It will often be windy with a risk of gales in the west and northwest, and along coastlines.

“Through the period, the south may see a gradual change to more settled conditions with longer periods of drier and brighter weather, though some rain is still possible.

“Further north, the wet and windy weather looks more likely to continue. Temperatures should be around normal or slightly below, especially in the north.

“If more settled conditions develop, there may be an increased risk of frost forming overnight.”

However, the Met Office forecasts the weather conditions to settle towards the end of March with longer and brighter spells hitting, especially in the south.