The Met Office is predicted sunnier climates for much of the UK as we head into the rest of July. Today, the forecast predicts a few sunny spells but scattered showers will remain as the country as the recent windy and thundery conditions works its way out of our weather system. But looking into the rest of the month, there’s some positive news on the horizon.

The forecast will see rain and scattered showers during the start of the month.

The Met Office says: “A general settling trend is expected to take place early in this period, as outbreaks of cloud and rain in the south, and showers in the north, give way to higher pressure from the Atlantic.

“Whilst scattered showers, or even spells of rain with strong winds, will continue to arrive from the west at times, and could affect the whole country, these are likely to be fewer and further between than of late.

“Such spells look likely to become increasingly confined to the north-west through the period.

“Temperatures will remain around average; often rather cool in the north and in more unsettled spells, to rather warm, or even locally warm and humid, in sunnier weather in the south.” 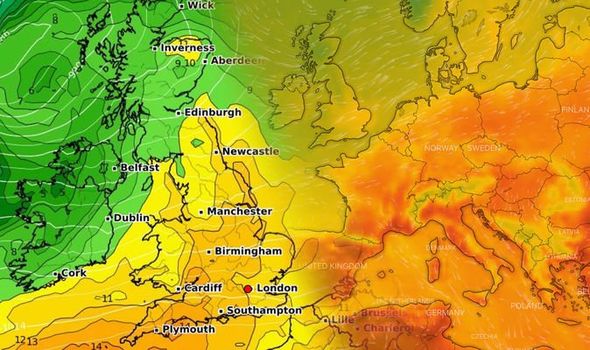 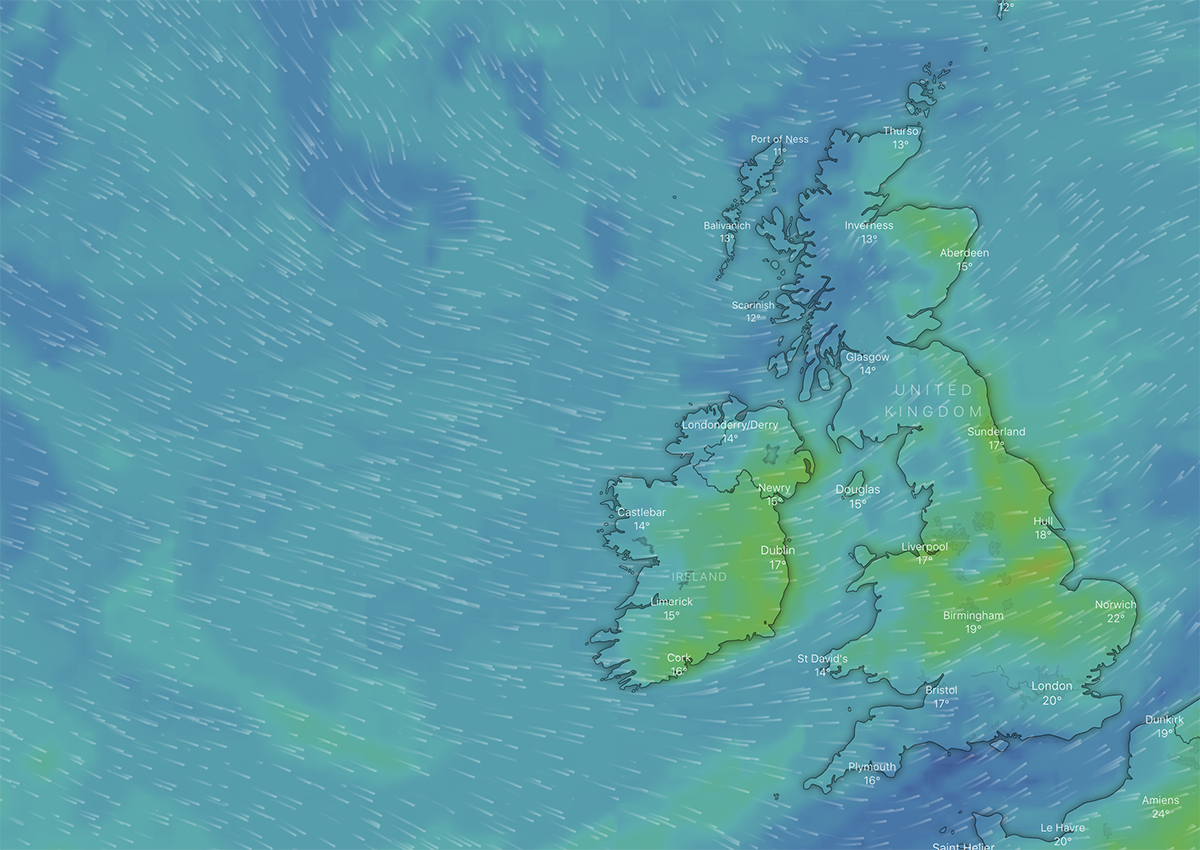 However, it looks like the mercury will pick up towards the end of the month.

As the month goes on, temperatures will become warmer – especially in the south of England – and the humidity will rise.

In fact, AccuWeather forecast highs of 26C towards the end of the month. 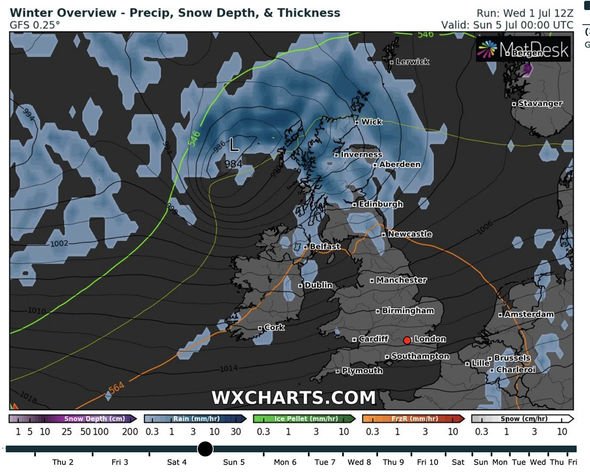 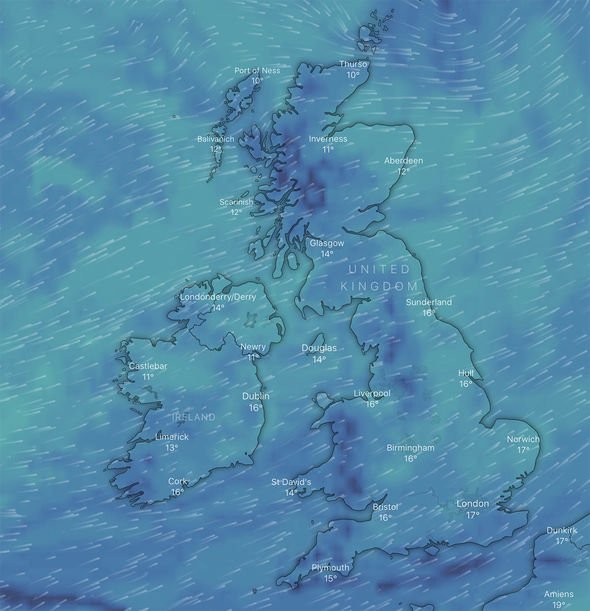 The forecast towards the end of the month, from July 16 to 30 reads: “Most likely continuing settled overall, but confidence in the longer range forecast is low (typical for this time of year).

“Plenty of dry, fine weather around, with the most likely scenario seeing rain increasingly moving away from the northwest bringing more prolonged settled weather here too.

“A greater likelihood than earlier in the month of warm or even hot episodes across the south, especially south-east, with a chance, albeit still low, of thunderstorms.

“Temperatures are expected to be above average overall.”

However, the warm long-range forecast comes as the weather agency issued more severe weather warnings for rainfall in the coming days with parts due to be hit by up to two inches in some areas.

The Met Office has advised parts of the UK will be smashed by an intensely strong spell of torrential rainfall.

The rain warning, which is in effect from 1am on Friday to 3am on Saturday, looks likely to bring significant disruption to journey times and potential flooding to some regions.

The warning reads: “Rain, heavy at times, is expected to bring accumulations of 20 to 30mm quite widely within the warning area, and locally as high as 60mm on high ground.

“Rain will gradually ease on Friday night before clearing during Saturday morning.” 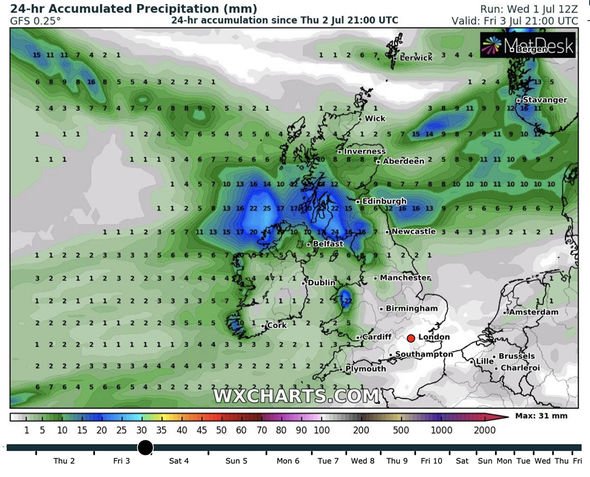 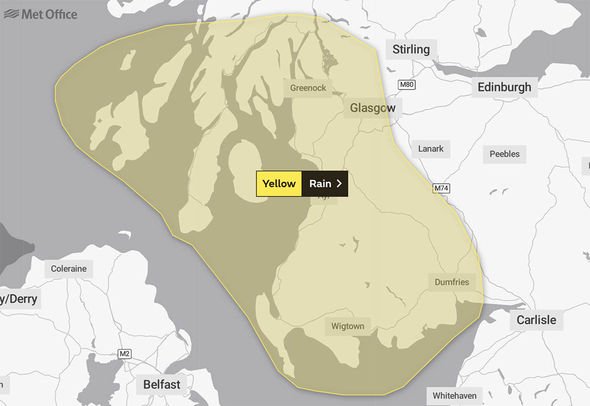 The yellow weather warning is in effect in the following regions:

Across the UK generally, the weather is due to be quite wet with conditions drying out by Sunday.

On Friday, there will be rain and strong winds in the northwest which will gradually spread southwards.

The east and south England will become increasingly cloudy, but conditions will be mostly dry.

The weather is likely to perhaps brightening up for a time in west Scotland.