Protesters chanted “Angela Merkel must go” during heated demonstrations against the German Chancellor’s coronavirus restrictions. The Berlin police estimated that 18,000 people took part in Saturday’s march that claims the coronavirus rules are “too restrictive”. However, police have since tried to disperse the protest, after announcing that they were cutting short the demonstration.

The police order followed claims from authorities that protesters had flouted court-mandated rules to wear masks and keep a safe distance from each other.

Protesters in Berlin posted footage of the march on social media, tweeting that they “are the masses” and were “sending a warning to Angela Merkel”.

DW’s Thomas Sparrow said that attendees ranged from families who “just want to have the right to protest,” conspiracy theorists, and far-right groups.

However, the decision to break up the protest sparked multiple confrontations with police and several people have been detained.

JUST IN: Angela Merkel leaves press in stitches after response to Trump claim 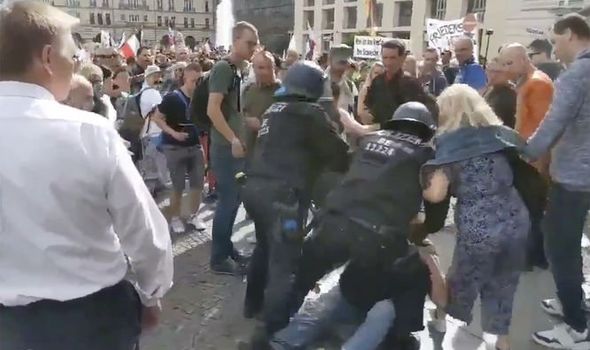 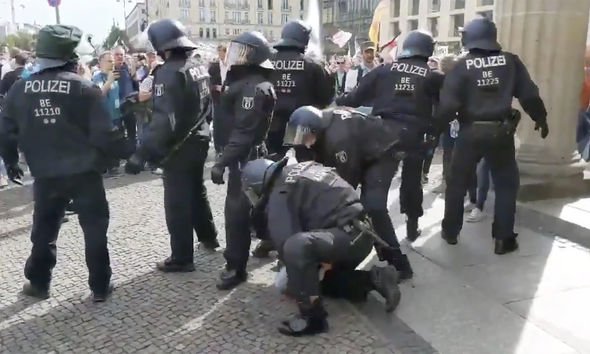 Berlin police tweeted: “Unfortunately, we have no other option. We’ve approached the leader of the demonstration and informed him that his assembly will be dissolved by the police.

“All the measures taken so far have not led to compliance with the conditions.”

Around 3,000 police officers, including 1,000 federal police, were deployed ahead of the demonstration, alongside specialist equipment including water cannon, according to Berlin police chief Barbara Slowik.

Counter-protests against the main march also took place, with about 100 people at one rally, with participants claiming the march was led by “Nazis and fascists”. 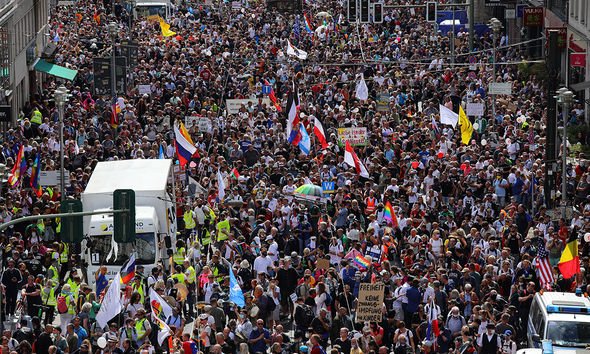 While Germany has not seen the overwhelming number of coronavirus cases recorded across some parts of Europe, it does have a growing infection rate.

Before the rally, Ms Slowik said: “We will not be able or willing to watch tens of thousands assemble and create infection risks.”

On Friday, Chancellor Angela Merkel urged citizens to keep up their guard against the virus, saying: “This is a serious matter, as serious as it’s ever been, and you need to carry on taking it seriously.” 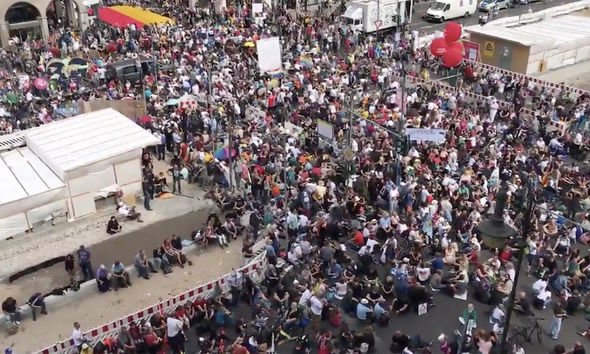 City authorities had initially tried to stop the march from going ahead, citing fears that safety measures would be ignored.

The ban sparked outrage from organisers who vowed to protest anyway, with some even calling for violence.

One leading right-wing organiser called for protesters to “storm Berlin”.

But a German court overturned the ban on Friday, under strict orders to abide by health and safety rules.