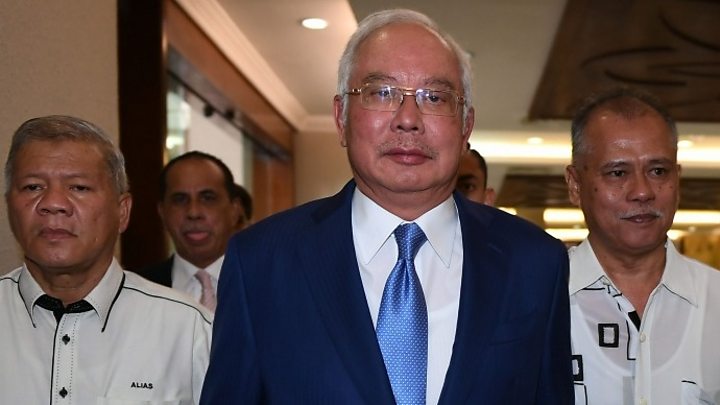 Mr Najib is facing several trials over the state investment fund 1MDB – this is the most significant covering 21 counts of money-laundering and four of abuse of power.

Mr Najib has denied any wrongdoing.

The former prime minister first faced trial over different allegations in the 1MDB scandal in April this year.

What’s the background to the scandal?

The 1 Malaysia Development Berhad (1MDB) fund was set up in 2009, when Najib Razak was prime minister, to aid the nation’s economic development.

In 2015, questions were raised around its activities after it missed payments owed to banks and bondholders.

Malaysian and US authorities allege that about $4.5bn was illicitly plundered from the fund and diverted into private pockets.

The missing money has been linked to luxury real estate, a private jet, Van Gogh and Monet artworks – and even a Hollywood blockbuster.

Opening the trial on Wednesday, prosecutor Gopal Sri Ram accused Mr Najib of being a key player in the scandal.

“His objective was to enrich himself,” the prosecutor said, outlining how the money was allegedly funnelled to the former prime minister.

Mr Najib was cleared of all wrongdoing by Malaysian authorities while he was prime minister.

Nonetheless, the corruption allegations played a big part in his historic election defeat in 2018 – and the new government swiftly reopened investigations into 1MDB.

Mr Najib’s wife, Rosmah Mansor, is facing charges of money-laundering and tax evasion, to which she has pleaded not guilty.