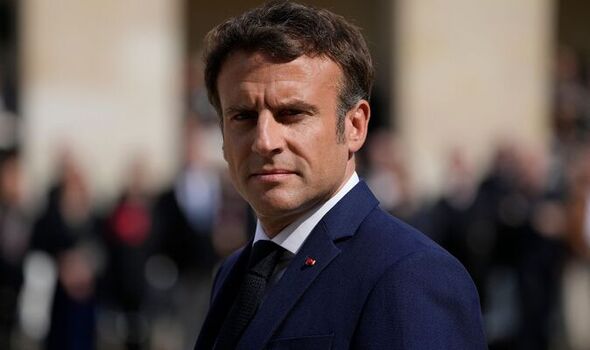 A new verb, macronit, has entered Russian slang. Its use varies but in essence it means to talk endlessly without achieving anything. One definition is given as “to appear very worried about a certain situation, show this to everyone, but do nothing”. A Russian confused by the new word posted online, asking what it meant.

The response was: “The verb comes from the behaviour of the French President. It means to call at any time, with or without reason.”

Another definition was given as: “A special talent in communication that starts with an insult towards the opponent, continues with a threat and ends with a request for a favour.”

Macron spoke to Putin repeatedly in the months leading up to the war, with little effect.

He has been one of the few world leaders to speak to his Russian counterpart during the war in Ukraine and has been criticised for the lengthy calls. Despite the conversations, Putin has remained set on his course of bloodshed.

Describing Macron’s efforts to avert war, French political scientist Anne de Tinguy said: “In truth, he doesn’t have much leverage. But he sure has the will.”

Macron’s labours did pay some dividends, however, with Putin congratulating him on last week’s election win. Putin wrote: “I sincerely wish you success in your state activities, as well as good health and wellbeing.”

Also beginning to appear in Russian is the verb Dzonzonhit – based on Boris Johnson – although its definition varies depending on who is using it.

Amongst Russian speakers supporting Ukraine the definition was given as “to keep your promises, to act fast, to help”.

However, an alternative definition was given by Putin supporters, which roughly translates as “to make a misstep”.