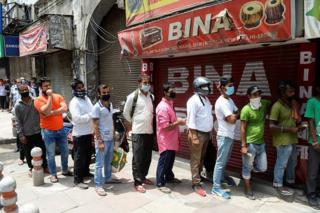 Police in India’s capital Delhi shut liquor stores in parts of the city, hours after they opened for the first time since 24 March.

India issued new guidelines that came into effect on Monday, permitting some standalone shops and offices to open.

States have been pushing for liquor shops to reopen as excise duty on alcohol is a major source of income.

However, videos of snaking lines and jostling crowds in front of the shops have gone viral.

This is despite strict orders that people buying alcohol would have to stand six feet apart, and that only five people would be allowed inside a shop at any given time.

Delhi was among several states that reopened liquor shops, but similar scenes are being reported from other parts of the country.

In the southern state of Karnataka, queues formed outside alcohol shops from very early morning.

Earlier, Delhi Chief Minister Arvind Kejriwal had said that it was time for restrictions to be relaxed in the city, saying it was time the city “learned to live with the coronavirus”.

With the economy slowing dramatically due to India’s grinding lockdown, there has been pressure to partially ease restrictions.

But social distancing is proving to be a real challenge.