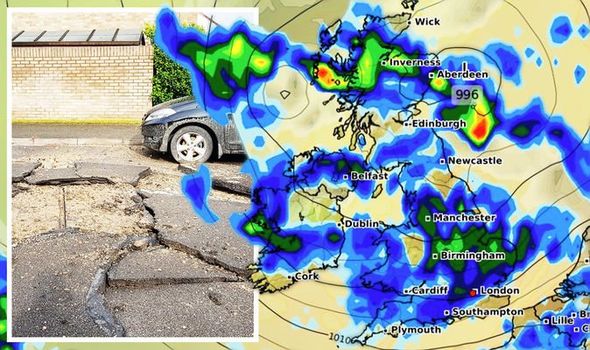 The Met Office has issued yellow weather warnings cautioning thunderstorms in parts of south east England today after almost a month’s worth of rain fell in a day. The thunderstorms may cause dangerous flooding and people are warned there is a chance that homes and businesses will be damaged from floodwater or even lightning strikes. Over the next four days, almost every corner of Britain will be battered by the thunderstorms, according to Met Office predictions.

Tomorrow ushers in yellow thunderstorm warnings everywhere north of Birmingham in England and engulfing almost all of Scotland.

The stubborn thunderstorm warnings will remain active in the UK until Thursday.

The latest warnings come as homes, roads and tube stations were flooded in the south of England and Whipps Cross Hospital in East London lost power due to water damage.

Prime Minister Boris Johnson tweeted on Monday afternoon: “My thoughts are with everyone affected by the flooding in London and the South East.

“A huge thank you to the emergency services and volunteers helping families and businesses through this difficult time.”

The apocalyptic weather comes after a glorious period of sunshine last week nudging 32C in some parts of the country.

An official study would have to be completed before any connections to the erratic weather can be linked to climate change, according to a Met Office spokesman.

However, he stressed that the science indicates warm air can hold more water, so rainfall is increasing on average across the world.

Flood warnings have been issued in 10 areas of England after a period of torrential rain battered the country.

The floodwater risks damaging homes and businesses as well as delaying transport links and cutting off roads.

The affected areas are:

Ravensbourne area in the London Boroughs of Lewisham, Bromley, Greenwich and Croydon

River Beult from Pluckley and Bethersden to Hampstead Lock at Yalding

River Hogsmill area from Ewell to Kingston upon Thames