Experts warn of dangers facing the 700,000 refugees and migrants already subjected to ‘unimaginable horrors’ in Libya. 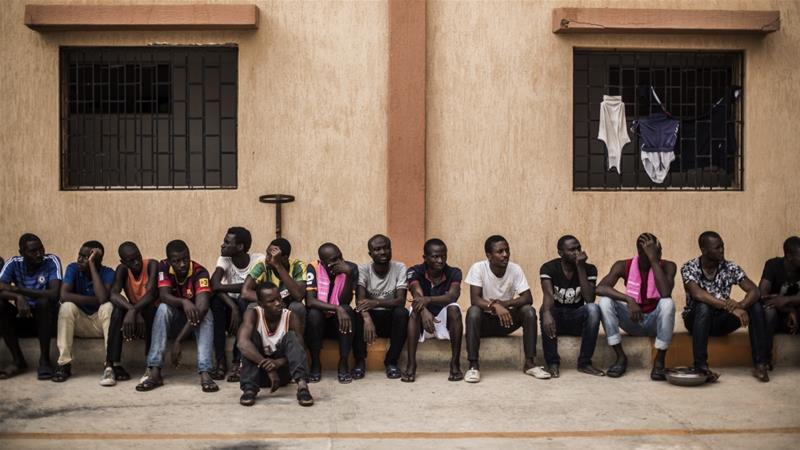 An outbreak of the coronavirus in Libya could be “truly catastrophic” for the internally displaced people (IDP) and close to 700,000 refugees and migrants in the war-torn country, the United Nations migration agency has warned.

Libya has so far reported 17 confirmed cases of the new coronavirus, including one death. It has enforced a nationwide curfew from 2pm to 7am and prohibited intercity travel to curb the spread of the virus that has infected more than a million people worldwide and killed more than 60,000.

The large oil producer has been engulfed in chaos since 2011 when longtime leader Muammar Gaddafi was killed in a NATO-backed uprising.

Since 2014, the country has been split between two rival administrations. The internationally recognised Government of National Accord (GNA) led by Prime Minister Fayez al-Sarraj is based in the capital, Tripoli, while the House of Representatives, allied to renegade military commander Khalifa Haftar and his Libyan National Army (LNA), is based in the country’s east.

The plight of the Libyans and the migrants has been compounded by the continued fighting in the country. Since April 2019, forces loyal to Haftar have been fighting to seize Tripoli in an offensive that has killed hundreds and displaced 150,000 people.

The conflict has left Libya with “limited financial resources and shortages of basic equipment”, while the “pandemic represents an additional challenge”, the UN refugee agency (UNHCR) told Al Jazeera.

In an interview with Reuters news agency in March, the head of the Libyan National Center for Disease Control (NCDC), Badereldine al-Najar, said: “In light of the lack of preparations, I now consider Libya not in a position to confront this virus.”

Intense bombardment shook Tripoli on Wednesday. Residents said the shelling was the worst in weeks, Reuters reported, shaking windows in the city centre. On Saturday, two people were also injured after a shell struck a hospital in the capital.

In recent years, Libya has also become a major gateway for African migrants and refugees hoping to reach Europe. Many of the migrants have fled poverty, conflict, war, forced labour, female genital mutilation, corrupt governments and personal threats, only to find themselves stranded in the middle of the Libyan conflict and also facing the threat of a potential coronavirus outbreak in the country.

A 2018 UN report highlighted that migrants and refugees are subjected to “unimaginable horrors” from the time they enter Libya, during their stay and in their attempts to cross the Mediterranean – if they reach that far – to make it to Europe.

“Detained asylum seekers are particularly vulnerable and exposed. They are staying in overcrowded and unsanitary conditions [in detention centres] and have access to very limited health assistance. Many centres are located in areas close to fighting,” Tarik Argaz, a spokesman for the UNHCR in Libya, told Al Jazeera.

Almost 1,500 refugees and migrants are reported to be held in 11 “official” detention centres across the country. Thousands more are held in “private prisons” run by armed groups and traffickers where extortion, rape and abuse are rampant, according to the UN, medical agencies as well as the migrants and refugees.

Both types of centres are reported to be overcrowded with unhygienic and inhumane conditions and suffer from a shortage of food and drinking water.

“The conditions are dire. Hundreds of people are locked in crowded hangars with no access to proper sanitation facilities. Many of them have been detained for months or even years. Worry is all they know,” Amira Rajab Elhemali, national field operations assistant for the International Organization for Migration (IOM), told Al Jazeera.

With very limited access to information – and almost no resources or healthcare – many are afraid of a potential outbreak of the virus.

“Migrants and refugees [in Sabha, southwestern Libya] are in the dark and they don’t have access to information about the virus and how to protect themselves,” a Nigerian man in Libya said. “I discovered large numbers of migrants haven’t gotten the true picture.”

Another Nigerian man in Sabha said “the most vulnerable people will be in detention centres and in crowded places where they accept newly arrived migrants”.

“Those places are run by Libyans and the smugglers, not any officials,” he added. “These places are very crowded and unhygienic. If the epidemic happens, it will be disastrous. The Libyans know about the virus and have gloves and masks but they don’t give it to the migrants.”

Libya was among the 27 countries “most vulnerable to emerging outbreaks” in the Global Health Security Index report published last month. It is also considered a high-risk country for COVID-19 by the World Health Organization. An increase in the infection rate would have a serious impact on civilians and the healthcare system, according to IOM spokesperson Safa Msehli, who added that “the repercussions will be truly catastrophic” for migrants.

“Doctors and first responders, who need to be trained on infection prevention and equipped with PPE, are routinely called back to the front lines to treat war wounded. Local community healthcare workers are also already overloaded,” Maria Carolina, deputy head of sub-delegation for the Red Cross (ICRC) in Tripoli, told Al Jazeera.

“Even the most advanced healthcare systems in highly stable and resource-rich countries have struggled to cope. A further COVID-19 outbreak will have a tremendously adverse impact on medical staff in Libya.”

Last month, the Human Rights Watch said Libya’s healthcare system was “battered by intermittent armed conflicts and political divisions since 2011”, warning that it will be unable to cope with large numbers of patients if infections spread.

Earlier this week, Libyan authorities announced the release of 466 prisoners as part of measures to curb the spread of the coronavirus. But the detention centres are still crowded and for those stuck inside, as well as people in overcrowded accommodation, preventive measures like physical distancing are not an option.

After the imposition of the curfew, migrants have reported an increase in the prices for goods and accommodation, adding to their concerns which include seeking work on a daily basis while also facing reported abuse, robberies and non-payment at times.

“[During the day] there are some who still go to the bus stop and sit there if someone brings them any sort of assistance or they are asked for a job,” a male migrant from Burkina Faso in Tripoli said.

Given the increased police and military presence on the streets, most migrants and refugees stay indoors for fear of being detained. In addition to concern and fear, UNHCR’s Argaz reported that rise in rent, food prices and basic commodities has made it more difficult for “those working in the informal sector to provide for themselves are unable to find work to secure their daily needs”.

A male migrant from Chad said the “situation was very hard and everyone was struggling”.

“People don’t have income and houses are rented. Now is a very difficult time,” he said.

Meanwhile, Libya has also closed its borders in response to the threat of a coronavirus outbreak, meaning that those who want to return home are not able to leave. Departing by sea is the only option but with Italy – the nearest European port along with Malta – undergoing a devastating COVID-19 outbreak, undertaking the dangerous sea voyage is even less appealing.

Since 2016, almost 12,000 refugees and migrants have drowned in the Mediterranean while trying to reach Europe, according to the IOM’s Missing Migrants project.