In Castel Volturno, thousands of undocumented migrants are caught between coronavirus and the mafia. 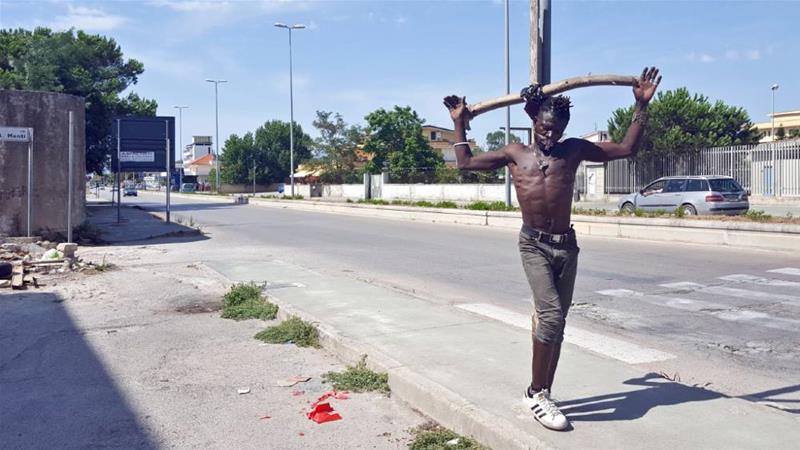 Rome, Italy – On what used to be a vast complex of illegally built apartment blocks and holiday homes on the Mediterranean shore, Castel Volturno is today a run-down no-man’s-land stretching along Italy’s ancient Via Domiziana coastal road in the southern Campania region.

Gutted houses, bars and pizzerias sit alongside abandoned restaurants and small businesses run by Italians and Africans alike, as well as a handful of Christian churches and a few Islamic centres.

Here, life unfolds along the busy dual carriageway, which bisects the city for some 30 kilometres (18 miles), and where the Neapolitan Camorra and the Nigerian mafia have been plying their business for decades, mostly busying themselves with drug trafficking and prostitution.

But alongside the mobsters, several thousand impoverished locals and migrants make up the social texture of Castel Volturno, where the coronavirus pandemic has further exposed the state of emergency in which its denizens live – even in “ordinary” times.

The city has clearly seen better days, but it now counts about 25,000 inhabitants, of which 5,000 are registered migrants and an estimated 15,000 are undocumented, mostly hailing from West African countries including Nigeria and Ghana, say officials. So far, the town has recorded a dozen COVID-19 cases and one death, and that is only among the Italian population, authorities say. The Campania region has registered more than 3,400 infections.

Under Italy’s lockdown, Castel Volturno’s battered streets are deserted, with only a few sporadic gatherings near post offices, relegating the struggle for the survival of its most vulnerable citizens to within the four walls of their homes.

Over the years, paltry rents for run-down houses, which are often paid to local landlords under the table, have made Castel Volturno a haven for destitute migrants in search of temporary shelter upon their arrival in Italy. Other migrants call it home instead, hustling a daily living, especially in the informal agricultural and construction sectors.

“National laws were deliberated in such a way over the past decades to relegate these people to the margins of society and criminalise them,” says Fatima Maiga, a member of aid group Italiani Senza Cittadinanza (Italians Without Citizenship). “Migrants have stayed in southern Italy, and especially in places like Castel Volturno, because the area offers them a chance to escape checks.”

Aid group representatives operating here have joined the town’s mayor in warning about a “ticking bomb” and a “bubble of desperation” ready to burst as people now under lockdown are prevented from earning their usual daily living.

Without a solid assistance programme, the population here risks falling victim to hunger due to the virus.

“In coordination with the municipality, we are driving through areas with the highest concentration of migrants and poverty spreading information in different languages, trying to reach as many people as possible,” Antonio Casale, director of the local Caritas Fernandes Centre, tells Al Jazeera.

“We know people are scared. We hope the relationship of trust we have built with them over the years can help them overcome the fear of being left abandoned, and calm them.”

As the national emergency continues, Italy’s Prime Minister Giuseppe Conte put 4.3 billion euros ($4.7bn) at the disposal of the country’s local mayors to deal with citizens’ needs, along with another 400 million euros ($438m) in a special fund for people who lack the funds for their basic food shopping.

Castel Volturno obtained 270,000 euros ($295,000) from the national emergency food package, but limited access to its official residents, thus leaving thousands outside the official food programme. The deadline for requesting food vouchers expired on Tuesday, while many in the migrant communities here were still wondering what the initiative was all about.

“We are not able to move right now, meaning we cannot interact with each other,” a Nigerian pastor from one of the Evangelical churches in Castel Volturno tells Al Jazeera. “There are people who are outside our reach because of the lockdown. Information that people look at on social media is not reliable at all. Many people are not understanding what’s happening.”

Luigi Umberto Petrella, the mayor of Castel Volturno, and a member of the conservative Fratelli d’Italia (Brothers of Italy), tells Al Jazeera he had received around 2,500 official requests and that other services had been set up for the other sections of the population in need.

“Two hotlines in English and French were established during the emergency with the help of Caritas to answer people’s requests,” he says. “And a task force comprising NGOs, charity groups, the Red Cross, members of local community centres and the civil defence has been set up to address the needs of the local community and spread information during the pandemic.” 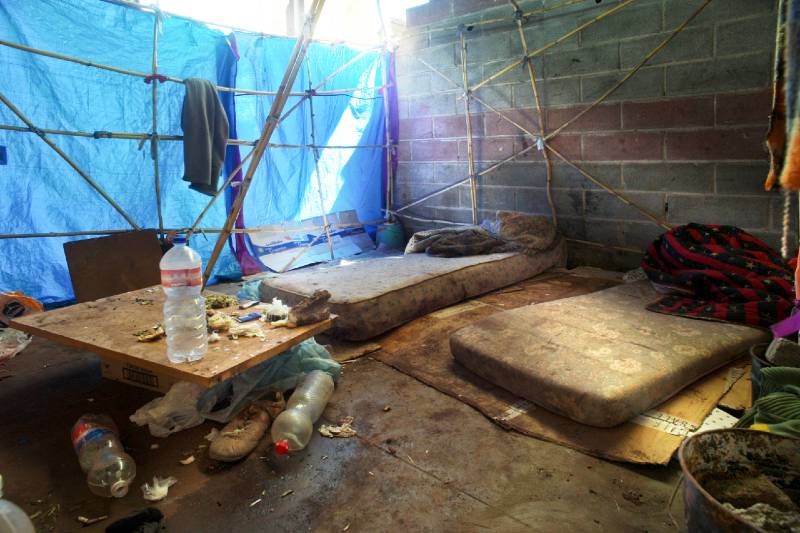 Food for those outside the official aid programme has been collected through the local food bank and private donations from local businesses and residents.

Distribution of bags containing goods to last a couple of days have so far reached 1,500 families, the mayor said, adding they were are trying to bring food to people to avoid the formation of large gatherings.

But residents say this has not been enough.

“We saw the municipality going out to deliver food aid to some people, but we don’t know how many people they were able to help. Many people in dire need might be left with nothing at the moment,” the Evangelical pastor from Nigeria says. “We want to help. But if you don’t give us an opportunity to support our people, the whole community will never be able to enjoy our service.”

Father Daniele Moschetti, a priest from the local Caritas Fernandes Centre, was busy distributing food bags to the most vulnerable while talking to Al Jazeera on the phone.

“With the help of a volunteer hailing from Ghana, we have delivered 47 bags today, just as many as yesterday,” he says. “We need to operate fast, also to avoid possible protests or revolts. It is difficult to work together here, but the concerted efforts of all the aid bodies active on the ground is working well. Still, we don’t know for how long we can resist. We need to think about the situation after the pandemic, too, and start talking about the regularisation of people here. We cannot postpone a future project for this town any longer.”

They tend to share rooms in ruined houses that often lack gas connections and running water, paying around 150 euros ($164) a month for a mattress in a room shared with up to 20 people, a source from Castel Volturno tells Al Jazeera.

But few workers are currently going to work in the fields at this time of crisis, the source says. They take their bikes and go to work at night to dodge controls, fearing police checks and the ensuing expulsions if they lack documents. For many going to work is simply a matter of survival.

Massimiliano Giansanti, president of the Italian agricultural association Confagricoltura, sounded the alarm earlier this week over the shortage of labour, which threatens to compromise the food harvest across the whole country.

Agriculture Minister Teresa Bellanova also stressed the need for the migrant workforce to continue to support the normal functioning of the food supply chain.

“There is a strong manpower deficit. [Workers] must be put in a position to work on a regular basis, especially because if the state does not govern certain processes, the mafia will take care of it,” she said. “We have to deal with reality. We must guarantee working conditions of absolute safety in the fields, and take the illegal workers out of the mafia nets.”

Dozens of NGOs are asking for an extraordinary legal measure to legalise the presence of European Union and non-EU foreigners who are already in Italy. But no such development has yet been seen. Meanwhile, Italy has closed its ports to refugee ships, saying its harbours cannot be considered safe havens because of the coronavirus epidemic. At the time of publication, the state of emergency is officially set to expire on July 31, but the deadline might well be extended.

“I don’t think that a large regularisation could be a solution,” Mayor Petrella says. “I am not against it in principle, but workers should be given a decent context to live in first. And Castel Volturno does not represent a decent social context. Also, many families of Italian origin live here amid dire poverty. Unemployment is skyrocketing in the area.”

But Elena Scroffa, of the Italian General Confederation of Labour, one of Italy’s largest unions, sent a stark note to government ministries to ask for a general and immediate amnesty for the migrant workforce as the pandemic spreads.

“Without such a regularisation, illegal workers who are much needed here won’t be able to access support programmes like those provided by the municipality – or basic health care services,” she said.

“We need instruments to implement a regularisation of the workforce once and for all. The usual bureaucracy cannot impact people’s life in such a way at such a time of crisis. If help from the state is not provided, of course people might look for help somewhere else, like from criminal mafia groups. This is unavoidable. And this applies both to the migrants and the locals.”