Fighter jets continued to decimate Hamas targets in the territory yesterday, the Muslim festival of Eid al-Fitr, destroying intelligence buildings. The militant group responded by firing rockets across Israel and sending “suicide drones”, packed with explosives, into towns on the border. Gaza’s Health Ministry said the death toll has climbed to 87, including 18 children and eight women, with 530 people wounded.

Islamic Jihad confirmed the deaths of seven militants, while Hamas has acknowledged 13 of its militants killed, including a senior commander.

He said tanks, armoured personnel carriers and artillery were being readied “for this option for mobilisation at any given moment”.

Nadia Sheikh Ahmed, a mother of five who lives in the Gaza Strip, said: “You cannot sleep, you cannot calm your children, you cannot be secure.” She added: “At any moment your home might be your grave.”

Helen Ottens-Patterson, Medecins Sans Frontieres head of mission in the Occupied Palestinian Territories, said: “Relentless bombing has destroyed many homes and buildings all around us. 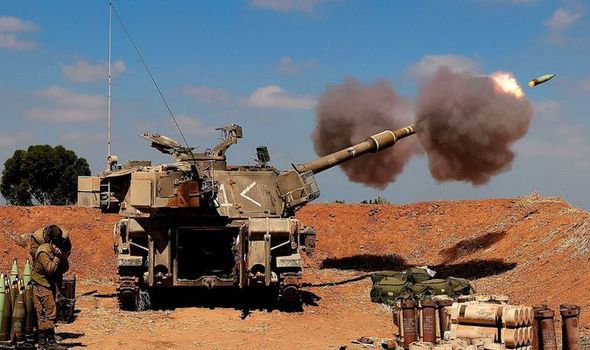 “It’s not safe to go outside and no one is safe inside, people are trapped.

“Emergency health workers are taking incredible but necessary risks to move around.”

Hamas requested a ceasefire on a “mutual basis” late on Wednesday after firing more than 1,600 rockets into Israel, killing seven civilians including a six-year-old boy.

The offer was rejected by Israeli Prime Minister Benjamin Netanyahu despite growing international alarm at the rising civilian death toll.

An Israeli cabinet minister said yesterday: “This will not end in the next few days. When we have hit all our targets and the other side has still not surrendered, we will launch a ground operation even though we do not seek it.”

Israel’s President Reuven Rivlin has warned of a civil war between Israeli Arabs – who make up 20 percent of the country’s population – and Jews as clashes continued in ethnically mixed towns yesterday. 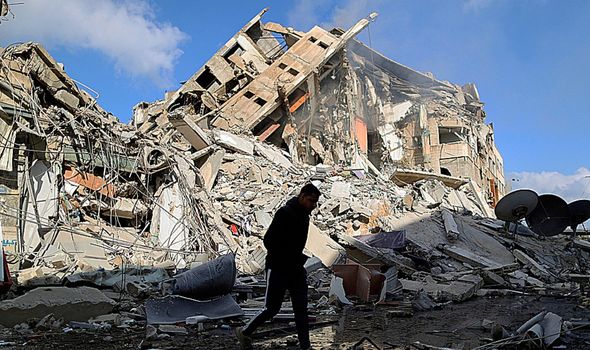 Days of violence between the two groups worsened overnight, with fighting breaking out on the streets of some communities.

Yesterday morning, a Jewish man was stabbed in the central town of Lod.

On Wednesday, a mob beat a man they thought was an Arab in Bat Yam.

Mr Rivlin said: “We are endangered by rockets that are being launched at our citizens and streets, and we are busying ourselves with a senseless civil war among ourselves.”

Mr Netanyahu has warned that he is considering deploying troops and approving the detention of suspected rioters without charge.

He added: “We have no bigger threat now than these pogroms and we have no choice but to restore law and order via determined use of force.”

Michal Abraham, who lives in Lod with her husband and four children, said: “We saw our neighbours telling Arab people where our cars are parked – and they came and burned both of our cars.

“That was very, very hard and heartbreaking to explain to our children.

“The police did not come. Our neighbours did not help us.

“We have to start thinking about how to continue living together after seeing this stuff.

“We want to live here because we believe we can do better.

“We believe that the communities can work things out.”