Home » World News » India’s race against time to save doctors 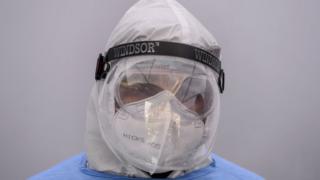 India, like most parts of the world, is in a race against time to procure personal protective equipment (PPE) for the safety of its medical teams fighting to halt the spread of coronavirus.

The country has reported more than 8,500 coronavirus cases and at least 289 have died. The first 100 cases were mostly reported in cities, but now more people have tested positive in smaller towns and cities.

This has generated a huge demand for protective equipment for doctors and health workers across the country, and state governments are struggling to cope with it.

In some cases, doctors were forced to use raincoats and motorbike helmets.

One doctor, who is working in the state-run hospital in the northern city of Lucknow, said: “We are not getting PPE kits as fast as we should.”

“This is really a war and we are being compared to soldiers. But you don’t send soldiers to fight a war without ammunition,” she told the BBC.

Several doctors and nurses have tested positive in cities like Delhi and Mumbai and the hospitals where they worked have been shut down.

This has raised serious concerns about the safety of frontline medical staff.

But PPE kits are also needed for law enforcement agencies who are helping health workers with contact tracing and the management of quarantine facilities.

A senior police officer in Uttar Pradesh told the BBC that policemen are also “directly exposed to the risk of coronavirus infection”.

“Recently a man who had tested positive ran away from a quarantine facility. The police had to bring him back. So, we also need to protect ourselves,” he said.

The policeman added that “we have PPE for now” but more will be “needed in the near future”.

“We urgently need PPE kits and have written to the central government about it. I do not want the doctors and nurses to work without the protective gear,” Delhi Chief Minister Arvind Kejriwal recently said.

India needs at least a million PPE kits, as well as 40 million N95 masks, 20 million surgical masks and a million litres of hand sanitisers at the moment, according to HLL Lifecare Limited, a government-owned body that has been tasked to procure PPE.

The federal ministry of health on 9 April said that it had placed orders for 17 million PPE kits – which is way more than the HLL Lifecare Limited’s estimates.

The ministry said it has approved 20 domestic manufacturers to produce protective gears.

But it’s unclear how quickly the manufacturers can meet the demand. The ministry said in a press release on 30 March that the suppliers were able to produce a total of 15,000 kits per day.

It also added that orders are being placed with foreign manufacturers from countries like Singapore and China, and some have come in the form of donations.

But the fear is that even this supply may not be enough if the pandemic spreads widely in smaller districts and towns.

Several smaller firms and self-help groups have come forward to bridge the gap – but they are mostly making masks and face shields.

Maker’s Asylum, a collective that provides tools and space to designers, came up with the idea of face shields for frontline workers.

“But we took on manufacturing because the country needs it. The face shield stops people from touching their faces frequently,” she told the BBC.

Ms Srivastava added that they have activated 12 such labs across the country and have so far manufactured 100,000 face shields.

Women-led groups in several states, including Kerala in the south and Indian-administered Kashmir in the north, are also making cloth masks.

But it’s the production of medical-grade PPE that India desperately needs to ramp up.

Public health expert Anant Bhan told the BBC that the government should have taken decisions quickly.

“We knew in January that the pandemic was coming and we should have started stockpiling sooner,” he said.

The government released production specification for PPE only on 23 March.

Mr Bhan said that “it was too late for manufacturers” to quickly ramp up production.

“They need to source raw material and adjust production lines to meet the specification. And that takes time,” he said.

Experts say that there are other areas where the government can look into to meet the demand.

Rajiv Nath, of the Association of Indian Medical Device Industry, told the BBC that the government should import raw material quickly and sign up more manufacturers.

“Garment exporters, manufacturers of army uniforms should be roped in because specifications are now available,” he said.

But Mr Bhan feels it’s not going to be easy.

“It’s admirable that clothes-making factories are coming forward to help. But PPE manufacturing requires specific skills and expertise,” he said.

He added that quality control is the key because “there is no point in having bad PPEs”.

“This virus is highly contagious and the only defence medical teams have is good-quality PPEs,” he said.

But quality control is not the only issue.

The country is in a complete lockdown. Exporters say it is difficult for them to get workforce and procure raw material.

Mr Bhan says that such “worries are real”.

“PPE manufacturing has to be taken as an emergency. Entire state machinery has to come together. Passes have to be given to factories and their workers so they can move easily,” he said. Ensuring supplies to remote corners of the country is another challenge.

Mr Bhan say there is no point in making PPE if they “can’t reach the one who need them the most”.

“It’s okay to compare our doctors with soldiers – but they shouldn’t be asked to make this heroic choice of going to work without proper protection,” he added.