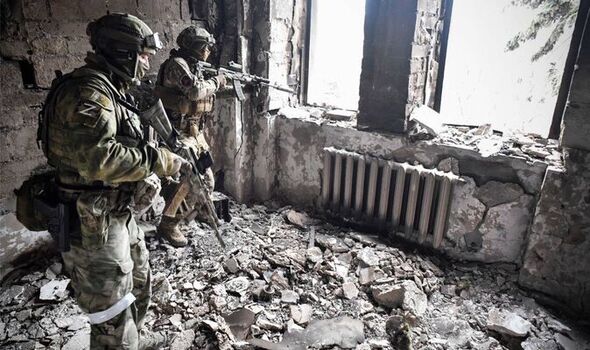 Video footage posted online shows an entire battalion, claiming to be the Donetsk People’s Republic 113th Rifle Regiment, in the midst of a revolt.

In the footage, the group of men stand in a line as their commander reads out a statement on behalf of all of them.

He said they had been stationed in the Kherson region in eastern Ukraine – a strategically important area where there has recently been intense fighting.

The man claimed his troops had to “overcome cold and hunger for a considerable period without material support, medical supplies or food”.

The unnamed soldier went on to say his fighters were recruited “without medical examinations”, meaning there were some with chronic diseases who “shouldn’t have been mobilised”.

But when the troops took these complaints to the higher command, they claimed they were “ignored and interpreted as sabotage”.

The commander said: “Show respect for your officers. What is there to be gained from sending your soldiers to die?”

Each fighter wore a piece of white fabric, presumably to act as a white flag signal of surrender.

Pro-Ukraine rebels have been operating in the area, with many posting threats on social media.