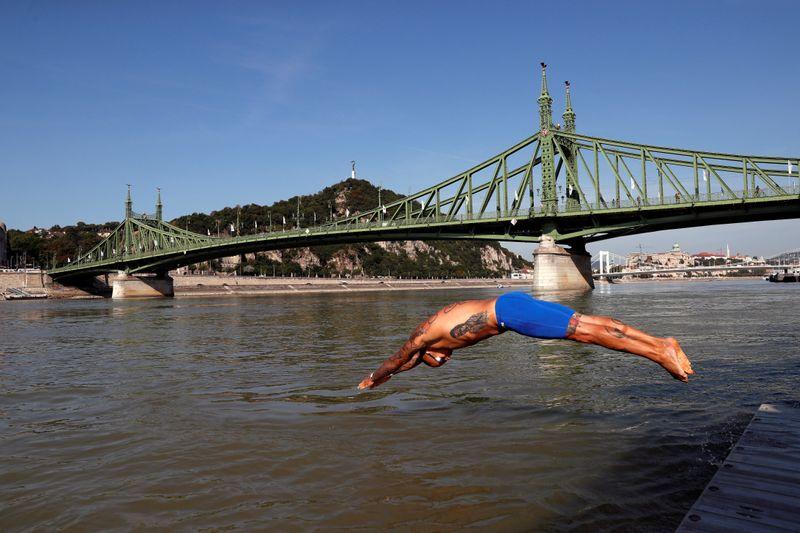 BUDAPEST (Reuters) – About 700 adventurous swimmers plunged into the fast-flowing waters of the Danube in Budapest on Saturday, enjoying an unusual view of the city’s famous bridges as they swam across the longest river in the European Union.

The event is part of the Budapest Urban Games, an event supported by the municipal government to encourage residents of the Hungarian capital to use the city’s parks, roads and waterways as venues for sport.

For the swimmers on Saturday, the biggest challenge was staying within a corridor of boats stretching the 430 metres (470 yards) from one side of the river to the other.

“If you try once, you will feel the power of the river, and it’s amazing… how strong and fast the river is,” said Istvan Kovacs, 50, nicknamed Koko, a former Olympic and world champion boxer who took part in the contest.

“To swim in our beautiful river… it’s a great feeling,” he told Reuters Television.

Organisers allowed only about 20-25 swimmers to be in the water at the same time to ensure safety and social distancing measures were implemented on the embankments due to the coronavirus.

Boriska Darvai, another participant, said she had found it more difficult to reach the other bank than during last year’s event, but “made up her mind” to make it.

“It’s a fantastic experience to see the Danube and our city from that angle,” she said.