Home » World News » How has the lockdown affected US crime? 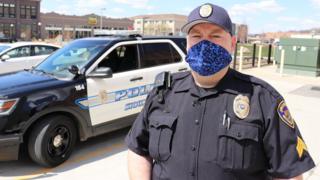 The onset of Covid-19 has changed the lives of people in the US and other countries in a dramatic fashion, shaping the behaviour of law-abiding citizens and criminals alike.

Hoodlums are now assaulting fewer people, according to police officers, and some are even following government safety guidelines. In El Salvador, gang members are practising social distancing and forcing others to do the same.

“It’s really about opportunity,” says Scott Decker, a professor emeritus at Arizona State University and the author of Burglars on the Job. “When we reduce opportunities for crime to take place, crime goes down.”

People are no longer out and about in the same way. Instead they are hunkered down at home, following the recommendations of health experts. The “new normal”, says Timothy Akers, a Morgan State University vice-president who focuses on epidemiological criminology, makes it harder for crooks to find people to beat and rob.

The result of less people in public is less crime.

In St Louis, Missouri, the city where criminologist Scott Decker lives, a stay-at-home order was imposed in March and violence has fallen dramatically.

“People are choosing not to shoot each other in the numbers that they were before Covid,” he says.

Crime has also dipped in Atlanta, where police usually have processed 100 to 150 crime reports at this point in April, according to news reports. This year, they have filed only 47.

In other places, the dynamic has shifted.

There were between 491 to 510 murders in Chicago in 2019 (the police and the county medical examiner’s office have different ongoing tallies).

That is roughly the same number of people – or less – who have died from Covid-19.

In some places outside the US too, violence has gone down. Police in South Africa say that, comparing this time period to last year, the number of murders has dropped from 326 to 94.

For some, however, the risk has increased. Police say that they are concerned about a rise in domestic abuse since people are spending more time at home, and tempers can flare. Some of the violence, says criminologist Scott Decker, has “shifted to inside homes”.

Yet for many, the change has been positive.

Zach Lewis, a Sioux City, Iowa, police sergeant, used to visit a local hospital frequently during his shifts to speak with crime victims. That has changed with the pandemic.

There were 51 reports of assaults there in February, says Jeremy McClure, a Sioux City police sergeant who compiles crime statistics. In March, the month that residents began to hunker down at home, there were 47. Numbers have also begun to “trend down” in April, he says, with 13 reports.

“The less that people are out and about, drinking at bars, there’s less conflict,” McClure says. “We’re seeing fewer assaults because of that.”

As a result, police officers such as Zach Lewis now spend less time in the emergency room.

Lately he has been updating a police training manual on a computer in his squad car, a task he rarely found time for during his shifts before the pandemic. “It’s a night-and-day difference,” he says. His shifts used to be hectic, he says, and now they are often quiet.

People stay home instead of going out, and now there are fewer bar brawls in Sioux City.

But, criminologists say the pandemic has also shaped the behaviour of some offenders, providing them with an alibi.

Toni Handy’s boyfriend, Christopher Mock, said she could not speak on the phone to her daughter because she was in quarantine.

The claim bought the North Carolina appliance repairman some time.

Authorities did not catch up with him until two days later. At that point, he was shot and killed in a confrontation with police. Afterwards Handy’s body was found lying under a heap of trash at their house, and the case is being investigated as a homicide.

More than 700 miles away, in Jupiter, Florida, David Anthony tried the same thing. He sent texts from his wife’s phone, saying she was ill with the virus. He fled the state and was later charged with kidnapping and murder.

Covid-19 gave ideas to these suspects, allowing them with to explain away mysterious absences of women they knew. The fake alibis were yet another way that the pandemic has shaped crime and had an impact on society.

Along with a drop in crime in some places, the pandemic has had another effect – big-city police departments have been hit hard, and their ranks are depleted.

At least 30 people who work in New York police departments have died, and thousands quarantined. Officers on duty are overworked, and they are making fewer arrests. Detroit officers, as one supervisor explained, are told to ignore some of the traffic violations and misdemeanours they see.

Criminologists say it is hard to gauge the long-term effects of the pandemic in terms of criminal violence, however. Crime is likely to go up once the stay-at-home orders are lifted.

For some, though, the impact of crimes that occurred during the pandemic will be felt long after the orders are lifted and people go back to their normal routines.

Roy Dawson Jr, the younger brother of Toni Handy, says her death has been devastating to him and their family: “In this big old Covid universe, there’s one less good person.”