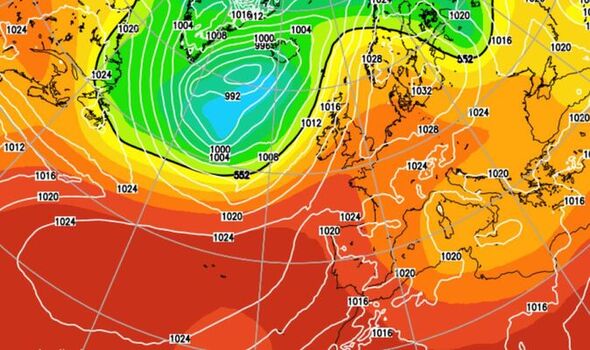 The UK will boil to fever pitch over the next fortnight as temperatures rocket towards 30C (86F). Blazing sunshine will be driven by a plume of hot air sweeping in from Italy and France.

Some forecasters say this summer, which government experts have already suggested may turn out warmer than average, will bring a succession of sizzling heat blasts.

“These will build throughout the summer months, but at the moment, August looks the most likely to bring these blasts of very hot weather.

“The first major spell of summer could arrive as soon as late May.”

The Met Office’s three-month outlook published at the start of May predicts the probability of hot weather this summer to be double that of normal years.

It also warns of ‘impacts from heatwaves’ through the next three months with only a 10-per cent chancer of a cooler than average season.

The sizzling outlook comes as Britons prepare to slap on the sunscreen with thermometers about to rocket.

After a ‘pleasant’ weekend ahead sees temperatures lift to around 20C, the mercury will simmer to flash point.

Sun-lovers should get t-shirts and sun cream ready for the first red-hot blast towards the end of next week.

British Weather Services’ meteorologist Jim Dale said: “Ahead of next weekend, the weather turns from warm to very warm or even hot.

“We could see temperatures nudge past the mid-20Cs towards 26C in the run up to mid-month.

“A warm plume of air will sweep around high pressure over the UK, arriving from the Continent, from France and Italy.”

While sun-lovers can finally welcome the first glimpses of summer this weekend, the following weekend will be the time to fire up the barbecues, he added.

“We have two good weekends on the way, but it is next weekend when it starts to really feel warm,” he said.

“This weekend will be pleasantly warm, although we are expecting temperatures to reach around 18C to 20C.”

Bookies have once again taken the axe to hot summer odds with Ladbrokes offering 4-1 on the 38.7C record tumbling, 6-1 on a hosepipe ban, and 8-1 on a record-melting heatwave.

Spokesman Alex Apati said: “The odds suggest record-breaking temperatures could well be on the cards as we prepare to strap in and strip off for a summer scorcher.”

The mercury will rise higher than average towards the end of next week, according to the Met Office.

Meteorologist Alex Deakin said: “There is a strong signal that it is going to be warmer than average towards the second half of next week.

“London could be very warm by the end of next week.

“A warm spell is likely across the UK for sure, but warmer doesn’t always mean sunny.”

High pressure driven by the jet stream ‘arching’ north of the UK will boost the hot spell, he said.

He added: “The jet steam arches up to the north and this ridging high up in the atmosphere allows high pressure to build across the UK.

“This high pressure will bring most of us a fine and dry weekend.

“High pressure continues to dominate through the weekend, probably into the early part of next week and maybe even beyond.”

The Met Office defines a heatwave as three or more consecutive days and nights of extreme heat.