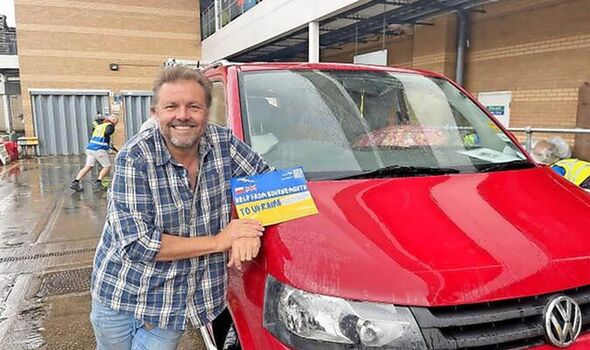 Images of bombed-out homes, abandoned cars, refugees and hungry, cold families have haunted me since Russian forces moved across the border on February 24. Like many Britons, I’ve found myself not being able to sleep or, finally dropping off and then waking up crying – worrying constantly about this unfolding tragedy and its consequences for millions of innocent people. It’s like watching a slow-motion car crash in vivid colour in scenes reminiscent of the Second World War but taking place in 21st-century Europe.

A week or so ago, I woke up in desperation thinking, “What can I do to help?” So I went to my local Costco to buy supplies – mainly over-the-counter children’s medicine, sanitary products, nappies and the like.

At the checkout, I was stopped from buying Calpol – there are limits on how much you’re allowed – but people on both sides of me in the queue offered to take it through and then refused my money.

I was so touched by the kindness of strangers I made a short video which went viral. I was very emotional, I’m not ashamed to admit, but these were people at their best.

The response was amazing. I woke up a day later and it had been viewed 30,000 times. I thought there must’ve been some mistake but there wasn’t.

As a result, I was contacted by people assisting an incredible organisation, Help From Bournemouth To Ukraine, that has been sending humanitarian supplies across Europe as the refugee crisis grows.

It was only set up a fortnight ago by Karol Swiacki – a local Polish shop owner who originally asked for donations from the Polish community. Already, it’s making an incredible difference, collecting tons of supplies and dispatching them on the 1,200-mile journey to the Ukrainian border.

Karol, 40, said: “I’m getting direct requests for urgent aid. We’re speaking to a children’s home at the moment that needs lots of ­bottles, formula and blankets and that’s where we can help. Every pound, every hour, every donation really does make a huge difference to the lives of those that have been torn apart by this awful war.”

I ended up buying 300 survival blankets on Amazon. Karol has got an amazing operation. They’ve been offered warehousing and have more than 100 volunteers. But they don’t have enough transport.

I’ve got a VW Transporter van so I thought I’d go to Bournemouth and see things in action. But once they told me about the transport issues, I knew I had to make the journey myself.

There are people out there who, quite ­cynically, say if you donate things, they either end up on the black market dumped by the roadside or rotting in a warehouse.

I doubted this was true, but I wanted to see with my own eyes, to be able to tell people what is happening and reassure them their kindness is getting to where it’s needed most. It’s direct action at its very finest.

My wife Kirsty wanted to come with me to share the driving. But I would be coming within 12 miles of the border close to where Russian missiles hit a training base near Lviv on Sunday.

It’s a warzone (it will definitely invalidate my travel insurance!). If ­something went wrong, or I got into a pickle, that is one thing. But if Kirsty was with me, it’s a whole different story. We made the difficult ­decision that she should stay at home with our son, 14, and daughter, 12.

Talk about an eleventh-hour plan! The temptation to set off and just drive is enormous, but without knowing where to go you risk wasting time and effort without actually helping. Karol’s group knows people on the ground who need stuff and now have contacts at the refugee centres. It costs them around £3,000 for every round-trip.

When they realised I had a small private van, they decided to entrust me with valuable medical supplies and other bits and pieces that might get lost travelling by truck. I’ve carried, I suspect, hundreds of ­thousands of pounds worth of medical kit: saline drips, defibrillators, heart monitors, foetal monitors, surgical equipment – quite literally life-savers.

I booked the ferry and Help From Bournemouth To Ukraine sorted some of the paperwork and I set out for Dover on Saturday: one man, one van and one mission with a selection of wine gums – I have been rationing myself to one every 50 miles – and an assortment of energy drinks to keep me going. I travelled from Dover to Calais on Saturday and drove through France, Belgium and The Netherlands, stopping overnight in Eindhoven.

On Sunday, I covered 850 miles – it was utterly exhausting, a total killer – and yesterday afternoon, having travelled from Krakow, Poland, I rendezvoused with Karol’s contacts in Medyka near the Polish-Ukrainian border. The journey is 1,260 miles according to Google, which says it takes 23 hours – that doesn’t include sleeping, going to the toilet or filling up.

You hear Western aid is being viewed by Putin as a hostile act. Was I, in my bright red VW van, at risk? Who knows? I hoped not, but I had to do it. There have been one or two horrible trolls who suggested I’m doing this because I’m a celebrity as some sort of publicity stunt.

It’s not and I’m not going to let a few keyboard warriors stand in the way of my helping. I’m doing this not as a celeb but as a man with a van. Those few comments aside, people have been incredibly supportive.

Handing over the equipment last night was incredibly emotional, probably not helped by the fact I’ve hardly slept for 48 hours. The courage of volunteers moving supplies across the border into a war zone is truly humbling.

I can now confirm that those donations, from Gladys in Bournemouth or Paul in Wolverhampton, ended up in the hands of the people who most need them.

I’ve seen it with my own eyes.

And you know what, it turns out one individual, albeit with the help of a hundred or so others, really can make a difference after all. We all have that capacity to change the world, one small step at a time.