The cause of the explosion in Nevada, United States, is yet unknown. In a video shared on Twitter, a woman taking part in a tour of the concrete arch dam can be heard saying: “My goodness, something has just blown up.” Alarm sirens could be heard in a second video.

The incident happened just after 10am local time when visitors at the dam reported seeing an explosion, fire and smoke at the base of the dam.

The City of Boulder said in a statement: “Boulder City Fire Department is en route to an emergency call at Hoover Dam.

“No further information is available at this time.” 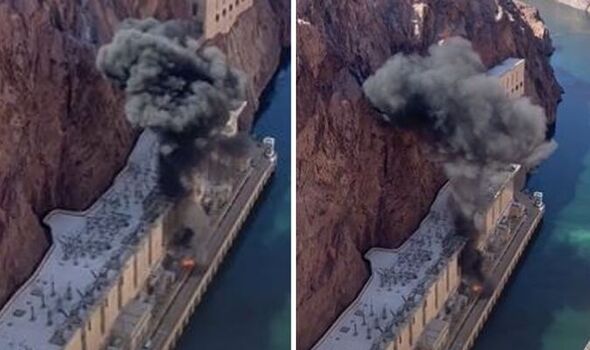 Built nearly a century ago — construction began in 1931 as the US was withering under the Great Depression — the Hoover Dam was designed to provide irrigation water and hydroelectric power, as well as to control seasonal flooding of the Colorado River, which made downstream settlement possible.

The largest dam in the world at the time of its completion in 1936, it stores enough water in Lake Mead to irrigate two million acres.

It also serves as a popular tourist destination.

Today, although millions of gallons of river water continue to hurtle through the dam every day, generating electricity for hundreds of thousands of homes, draught in the west of the country is increasingly affecting the Hoover Dam, as reservoir levels are plummeting towards deadpool, at which point power production will no longer be possible.

At its height, the lake surface sits over 1,200 feet above sea level. But after more than two decades of drought, it is now less than 1,050 feet – the lowest since the lake was filled.

As it falls about a foot a week, the danger is obvious: If it drops to 950 feet, the intakes for the dam won’t be under water and the turbines will stop.

The circumstances of Tuesday’s incident remain unclear. Yet, people on social media were quick to point at climate change as the reason behind the explosion.

One Twitter user, @JaehJee, said: “My guess is an overheated transformer blew. Not a quick thing to replace. Could be a serious power supply problem for S. Cal. [sic] since output of the dam is already reduced due to low water.”

The City of Boulder said in an update shortly before 12pm local time: “The fire was extinguished before Boulder City Fire Department arrived on scene.

“Bureau of Reclamation/ Hoover Dam will be handling any additional questions”