HONG KONG (Reuters) – Police in Hong Kong fired pepper pellets and made 300 arrests as thousands of people took to the streets on Wednesday to voice anger over national security legislation proposed by China, that has raised international alarm over freedoms in the city.

In the heart of the financial district, riot police fired pepper pellets to disperse a crowd, and elsewhere in the city police rounded up groups of dozens of suspected protesters, making them sit on sidewalks before searching their belongings.

A heavy police presence around the Legislative Council deterred protesters planning to disrupt the debate of a bill that would criminalise disrespect of the Chinese national anthem.

Angry over perceived threats to the semi-autonomous city’s freedoms, people of all ages took to the streets, some dressed in black, some wearing office clothes or school uniforms and some hiding their faces beneath open umbrellas in scenes reminiscent of the unrest that shook Hong Kong last year.

“Although you’re afraid inside your heart, you need to speak out,” said Chang, 29, a clerk and protester dressed in black with a helmet respirator and goggles in her backpack.

The latest protests follow the Chinese government’s proposal for national security legislation aimed at tackling secession, subversion and terrorism in Hong Kong, terms officials in both Hong Kong and Beijing have used increasingly in regard to the pro-democracy protests.

The United States, Britain, the European Union and others have expressed concern about the legislation, widely seen as a possible turning point for China’s freest city and one of the world’s main financial hubs.

But Chinese authorities and the Beijing-backed government in Hong Kong say there is no threat to the city’s high degree of autonomy and the new security law would be tightly focused.

U.S. President Donald Trump, already at odds with Beijing over trade and the novel coronavirus pandemic, said on Tuesday the United States would this week announce a strong response to the planned legislation.

China responded by saying it would take necessary countermeasures to any foreign interference.

Protesters in a downtown shopping mall chanted “Liberate Hong Kong! Revolution of our times” and “Hong Kong independence, the only way out”.

One protester was seen with a placard reading “one country, two systems is a lie”, referring to a political system put in place at Britain’s 1997 handover of the city to China, which is meant to guarantee Hong Kong’s freedoms until at least 2047.

“I’m scared … if you don’t come out today, you’ll never be able to come out. This is legislation that directly affects us,” said Ryan Tsang, a hotel manager. 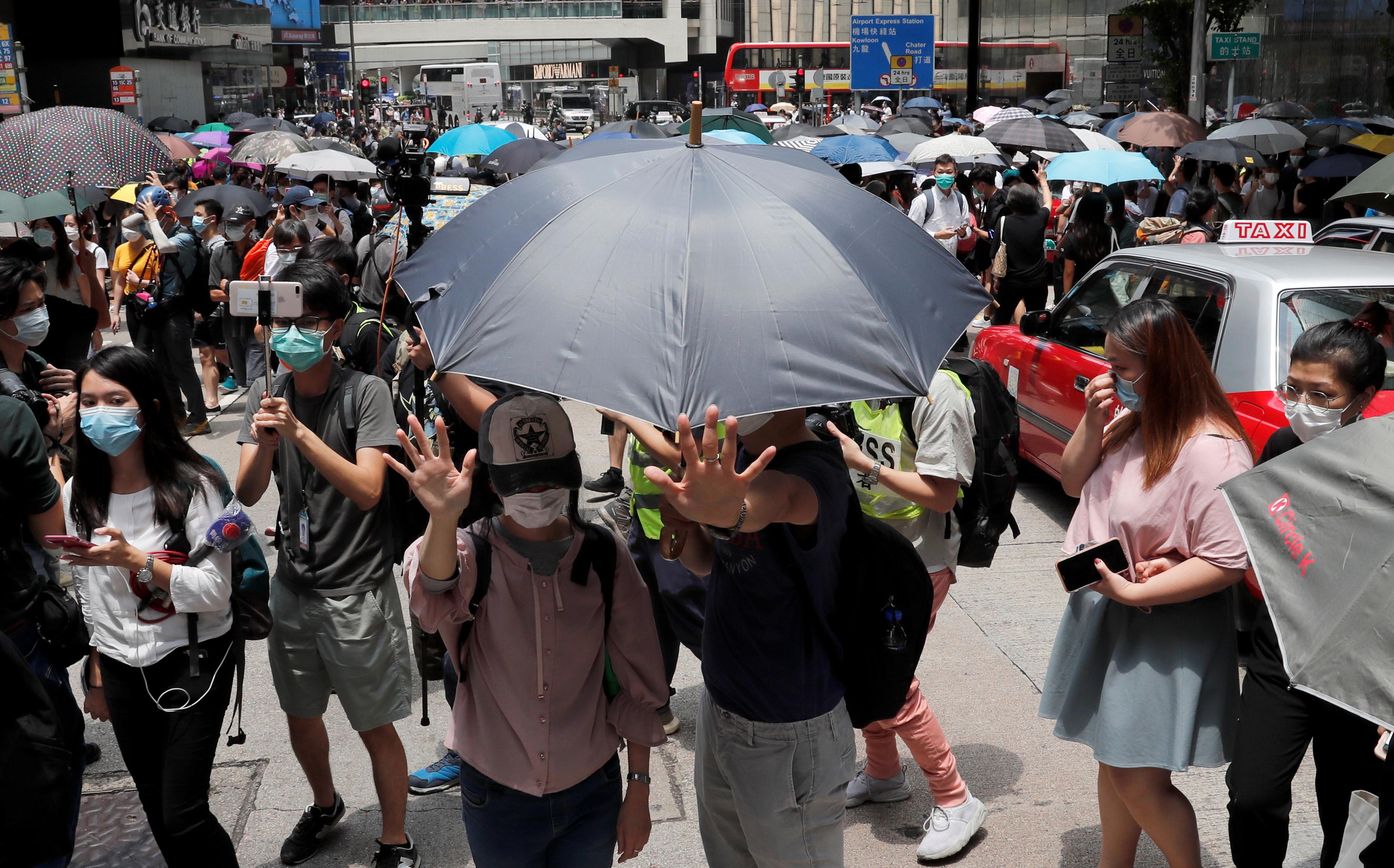 As the protests in the financial district died down, hundreds of people gathered in the working class Mong Kok district on the Kowloon peninsula, where protests flared repeatedly last year.

Marchers briefly blocked roads before being chased away by police

About 300 people were arrested, most for illegal assembly, in three districts, police said.

Hong Kong’s most prominent tycoon, Li Ka-shing, said in a statement security laws were within every nation’s right, but Hong Kong had the “mission-critical task” to maintain trust in “one country, two systems”.

Hong Kong media reported Beijing aimed to expand the scope of the legislation to include organisations as well as individuals.

The U.S.-China Business Council urged “all leaders to take those steps necessary to de-escalate tensions … and preserve the ‘one country, two systems’ principle”.

Asian shares slipped over the rising tension between the United States and China. Hong Kong’s bourse .HSI led declines with a 0.46% drop. 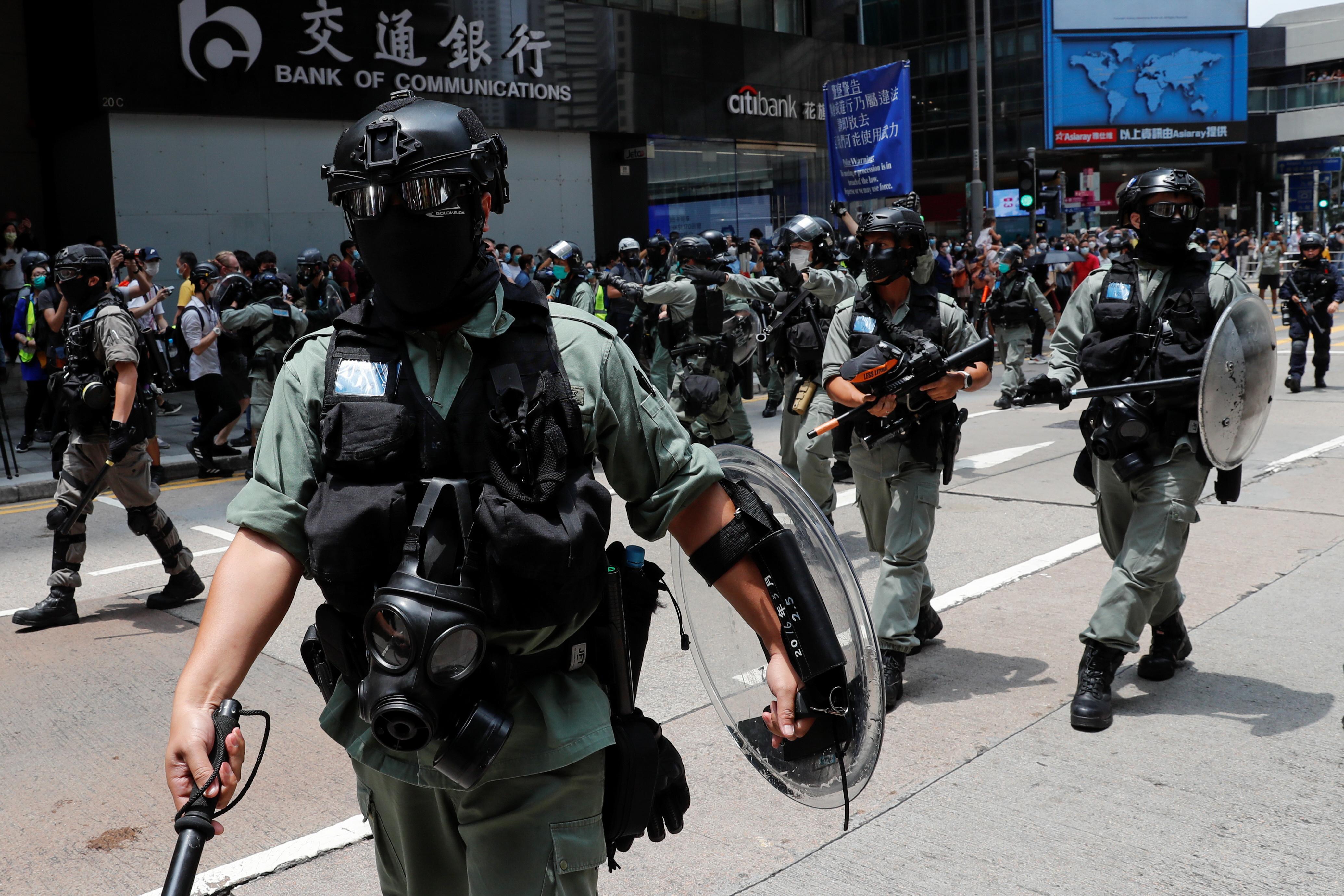 Protesters and pro-democracy politicians say Hong Kong’s National Anthem Bill, which aims to govern the use and playing of the Chinese anthem, represents another sign of what they see as accelerating interference from Beijing.

The bill carries penalties of up to three years jail and or fines of up to HK$50,000 ($6,450) for insulting the anthem. It also orders that primary and secondary school students be taught to sing the “March of the Volunteers”, and learn its history.

The anthem bill was given a second reading on Wednesday and is expected to become law next month.