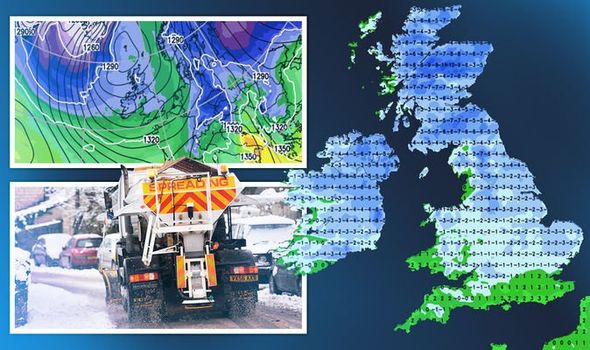 Arctic downpours threaten to leave Scotland and northern Britain under a blanket of white prompting government forecasters to issue three days of weather warnings. A mammoth polar plume stretching across Iceland from the North Pole will be dragged into the UK by cyclonic weather systems straddling the country. 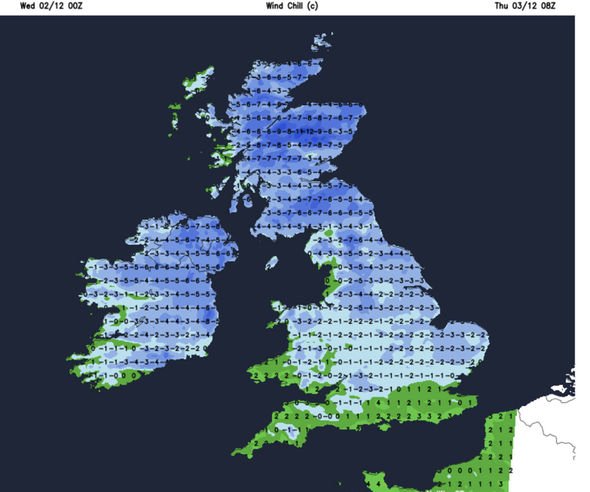 High pressure in the Atlantic will join forces with low pressure to the northeast forming a channel for numbingly cold Arctic air to flood into Britain.

Jim Dale, meteorologist for British Weather Services, said: “The polar front is looming southwards, and the cold will start coming in on Wednesday night before moving through the country during the week.

“This is an Arctic plunge, and we expect to see temperatures dip to -8C in the Scottish Highlands with lows below freezing widely across the rest of the country.

“Generally, over the next few days any snow events, either sleet or snow, will extend southwards, although these will be across higher ground.

“Cyclonic conditions to the east and high pressure to the west will funnel cold air in from the north.”

Wind chill charts reveal bitter gusts will make it feel close to -12C in Scotland this week with lows of below freezing elsewhere.

Cold weather threatens to grip the nation through December with chilly forecasts pushing down the odds on a white Christmas. 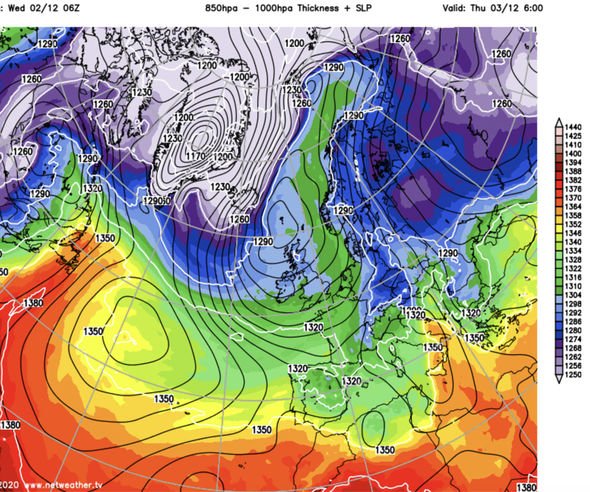 Mr Dale said: “It is too early to say for sure, but with this pattern of colder weather setting in, we are seeing the odds of a white Christmas reducing point by point.”

Long-range weather forecasters agree Britain is about to shiver in a long period of intense winter cold.

Heavy snow threatens to smother swathes of the country through December with the month shaping up to be the coldest for 10 years.

Widespread whiteouts will be driven in part by a plunge in solar activity threatening a ‘little ice age’, according to Exacta Weather’s James Madden.

He said: “This December, although there will be some milder, wetter periods, is more likely to follow a colder theme.

“Widespread wintry showers will push in across the country to give some moderate to heavy falls of lasting snow in places.

“The lack of Earth directed solar flares from a current lull in solar activity has an important bearing on patterns such as the Arctic Oscillation (AO) and The North Atlantic Oscillation (NAO). 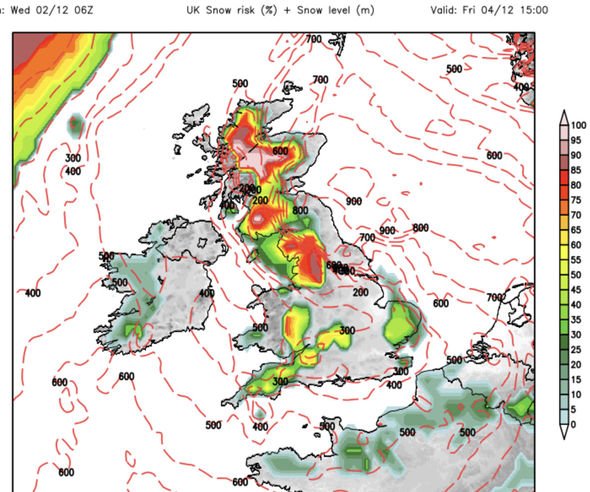 “It also encourages a more southerly jet stream which allows colder air to spill across our shores for some prolonged periods. This is how little ice age patterns attack.

“This is likely to become evident though extended periods of cold weather expected during December which could be the coldest and snowiest for 10 years.”

While it is too early to make a definitive prediction, a White Christmas is looking ever more possible, he said.

He added: “It is looking more likely, at least of that all-important flake of snow falling on Christmas Day.”

The Met Office has issued warnings for snow and ice across parts of Scotland tonight and through the rest of the week.

Up to four inches of snow is forecast in parts with icy roads and pavements threatening travel disruption.

A spokesman said: “Frequent showers will increasingly turn to snow on Wednesday night and persist into Thursday morning though these likely to fall as sleet and hail at times, mainly around coasts.

“Northwest Scotland looks most exposed to these showers with 2cm of snow accumulating by Thursday morning in places even to low levels.

“Larger accumulations are expected at higher elevations with 2-5 cm above 200 m and up to 10cm [four inches] over some of the highest routes.”

Wintry conditions through the coming weeks will be driven by a plunge in ocean temperatures in the East Pacific, a so-called La Nina.

The pattern of sea-water cooling set in earlier this year and has been strengthening over the past few weeks.

Mr Dale, author of Weather or Not? said: “La Nina is currently at a moderate intensity and is going to start having an effect on the UK.

“One of these effects will be colder conditions through the next month, although there will be an element of the weather coming in from the Atlantic.

“La Nina will help to drive the colder weather across Britain.”

Ladbrokes have slashed the odds on a White Christmas to 1/2 to 10/11 as snow starts to fall across parts of Britain.

Spokesman Alex Apati said: “Temperatures are dropping and it’s drastically increasing the chances of a White Christmas as the odds continue to tumble.”

Coral’s John Hill added: “With an Arctic blast set to hit the nation, the prospects of a White Christmas this year are increasing all the time.

“We have cut the odds on the white stuff falling on the big day, with Aberdeen and Glasgow the most likely cities to see snow.”