BBC meteorologist Matt Taylor warned that “heavy and thundery” rain is set to hit most parts of northwestern areas of the UK this weekend. The southeastern corner, however, is expected to stay mostly dry and sunny with temperatures set to reach up to 19C degrees. Temperatures in parts of East Anglia could hit up to 25C degrees as we head into Sunday. Despite the forecast of sunny spells and dry weather in the southeast, Mr Taylor said northern areas of Scotland and Northern Ireland will experience “windy conditions” this weekend, with “the strongest of the wind” expected for this Sunday, especially across western areas of the UK.

Mr Taylor warned: “The [weather] chart screams autumn, big air of low pressure developing to the west, bouts of heavy and thundery rain running around it, especially across some northwestern areas.

“At this moment, however, there is some showers towards south parts of south Midlands, parts of southeast England, they’re going to just work the way a little bit further northwards and westwards.

“There’s more rain across western Scotland and developing to the east of Northern Ireland as we go through the day.”

Referring to southeastern areas of the UK, he added “Many of you, however, are going to have a dry day today with some sunny spells. 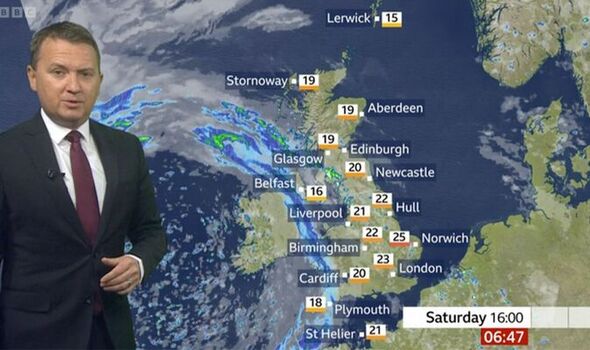 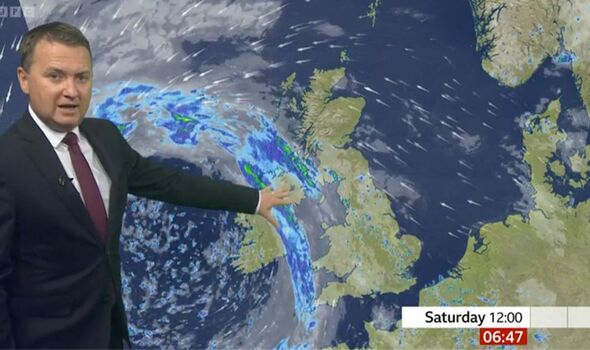 “Feeling a bit more humid out there, especially when the sun comes out with temperatures more widely into the 20s degrees.

“Maybe it will turn 26C or 27C degrees towards the southeastern corner.”

As we head into this evening and overnight, he continued: “The wettest weather could be in eastern Northern Ireland and southwest Scotland with potential minor flooding here and bouts of rain pushing across Northern Ireland towards the night.

“Many places will stay dry, but overall it will be a much milder night thanks to those winds which will be picking up all the time.

“It will be a quite windy weekend especially across northern and western ares. There will be more rain around, especially in the west.”

As we move towards Saturday and Sunday, Mr Taylor warned: “Rain will come and go across Northern Ireland and southwest Scotland.

“Showers will develop through northern England, north and east Midlands towards East Anglia, those could come with a rumble of thunder.

“Around them, however, [in the south] still some dry weather and some sunshine.” 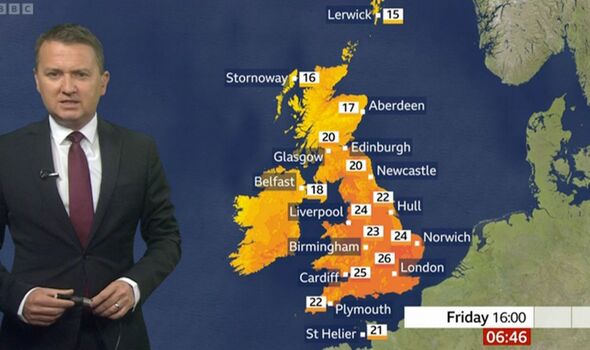 He added: “Windy day in the north of Scotland, but dry and sunny [in southern areas] with temperatures up to around 15C to 19C degrees, maybe 25C across parts of East Anglia.

“The west, however, will see something even windier through Saturday night and Sunday, especially across Northern Ireland.

“More rain coming in as we move towards Sunday morning [in northwestern areas], dry across parts of England and Wales.

“It’s the west where we see the more restless rain as we go through Sunday with the strongest of the wind”.