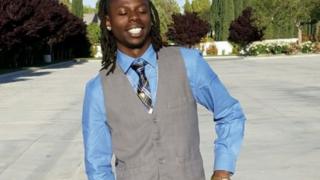 A black man who was found hanging from a tree in a California park died by suicide, authorities have said.

Robert Fuller, 24, had a history of mental illness and took his own life on 10 June in Palmdale, Los Angeles sheriff commander Chris Marks said.

A post-mortem examination had returned an initial finding of suicide, but this was rejected by Mr Fuller’s family, prompting a further investigation.

The case came amid US protests over the death of George Floyd.

According to the Los Angeles Times, Mr Fuller had attended a Black Lives Matter protest on the eve of his death.

Mr Fuller’s death in the high desert city of Palmdale, about 60 miles (96km) north of Los Angeles, shook the black community in the Antelope Valley.

Some said they feared it could have been a lynching, a murder by a mob with no due process or rule of law. Across the US, thousands of African Americans were lynched by white mobs, often by hanging or torture, in the 19th and 20th Centuries.

Amid widespread dissatisfaction over local authorities’ initial conclusion of suicide, it was announced last month that the FBI’s civil rights division would investigate the deaths of Mr Fuller and another black man in similar circumstances in southern California.

Mr Fuller’s family described him as someone who enjoyed music and video games, and insisted he would not have taken his own life.

But Cmdr Marks told a news conference that Mr Fuller had gone to a California hospital in February 2019 and said he was hearing voices telling him to kill himself.

He also said that Mr Fuller was treated at a hospital in Nevada last November for suicidal ideation.

The investigation found no evidence of foul play, he said.

The other case that attracted widespread attention was that of Malcolm Harsch, 37, who was found hanging from a tree at a homeless encampment in Victorville on 31 May.

Local officials said his death was probably a suicide.

If you want to talk to someone about the issues raised in this piece, you can call the US National Suicide Prevention Lifeline on 1-800-273-TALK (8255) or contact the Crisis Text Line by texting TALK to 741741.

You can call the UK Samaritans Helpline on 116 123 or visit samaritans.org.