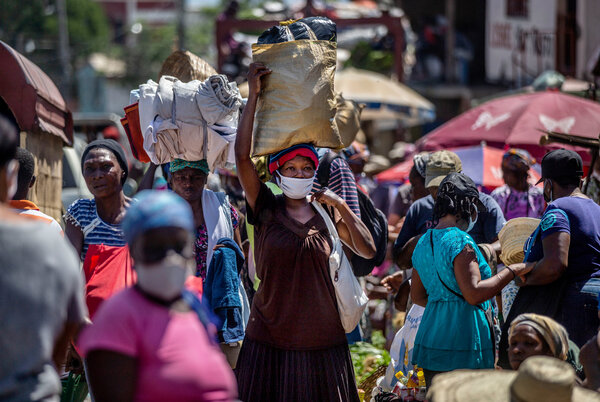 The assassination of President Jovenel Moïse of Haiti could complicate efforts to contain the Covid-19 pandemic in the Caribbean nation, which has yet to begin vaccinating its citizens, officials from the World Health Organization warned on Wednesday.

Carissa Etienne, the director of the Pan American Health Organization, which is part of the W.H.O., said her organization had made Haiti a top priority in recent weeks as reported cases have surged.

“I am hopeful that the arrival of vaccines in the country can start to turn the tide of the pandemic and bring some relief to the Haitian people during these very difficult times,” Dr. Etienne said. “We continue to stand with them now and will redouble our efforts.”

Haiti did not experience the kind of surge early in the pandemic that many experts feared could devastate the country, the poorest in the Western Hemisphere. But the pandemic has grown worse in recent weeks, with a rise in reported cases that experts warn is almost certainly an undercount, considering the country’s very limited testing capacity.

Last month, Covid-19 claimed the life of René Sylvestre, the president of Haiti’s Supreme Court — a leading figure who might have helped to establish order in the wake of an assassination that has plunged the country into even deeper political uncertainty.

Dr. Etienne’s organization said in an email response to questions on Wednesday that while it was too soon to evaluate the impact of the assassination, “further deterioration of the security situation in Haiti could have a negative impact on the work that has been done to curtail Covid-19 infections,” as well as on vaccination plans.

The organization said that Haiti was also facing challenges from the start of hurricane season and the recent detection of the Alpha and Gamma virus variants on the island. Though “vaccines are expected to arrive shortly” in Haiti, the organization said it did not have a specific delivery date.

In June, Dr. Etienne urged the global community to do more to help Haiti cope with rising coronavirus cases and deaths. “The situation we’re seeing in Haiti is a cautionary tale in just how quickly things can change with this virus,” she said.

Haiti is an extreme example of the “stark inequities on vaccine access,” Dr. Etienne said. “For every success, there are several countries that have been unable to reach even the most vulnerable in their population.”

Across Latin America and the Caribbean, there are “millions of people” who “still don’t know when they will have a chance to be immunized,” she said.

She said the inequitable distribution of vaccines posed practical and moral problems.

“If we don’t ensure that countries in the South have the ability to vaccinate as much as countries in the North, this virus will keep circulating in the poorest nations for years to come,” Dr. Etienne said. “Hundreds of millions will remain at risk while the wealthier nations go back to normal. Obviously, this should not happen.”