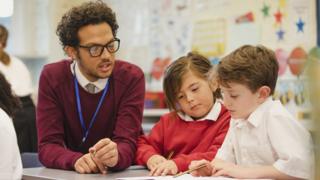 The Isle of Man government’s position on pay increases for teachers is “nothing less than shameful”, teaching unions have said.

A joint statement from four unions said the government had refused “any negotiations other than to discuss cuts” during a meeting earlier.

Three of the unions have been in a long-running dispute over pay conditions with the Department of Education, Sport and Culture (DESC).

The dispute began in 2018 after the School Teachers’ Review Body’s recommendation of an across-the-board 3.5% pay rise was not fully implemented.

A deal that would see newly qualified teachers paid almost £30,000 and the lowest pay bands scrapped was accepted by the NEU on 17 January but rejected its by members.

Meanwhile, members of ASCL and NAHT began action short of strike in January, with NASUWT members following suit in February.

Talks between unions and the government were halted in March due to the coronavirus outbreak.

In the joint statement, the unions said representatives had been left “deeply disappointed” by the meeting earlier in which they said the DESC had “cited clear instructions from the treasury, allegedly received 15 minutes prior to the commencement of the meeting, that no additional funds were available”.

“The joint trade unions were shocked and frustrated that despite agreeing to the meeting, the government refused to enter into any negotiations other than to discuss cuts,” the statement said, adding that they were “further appalled that there seemed to be no immediate appetite… to request any additional funding”.

“The government’s position is nothing less than shameful, and will come as a tremendous disappointment to all teachers who continue to go the extra mile,” it added.

Speaking after the meeting, the NAHT’s Rob Kelsall said it “could lead to a resumption of industrial action”, while the ASCL’s Sara Ford said the union was “committed to trying to find a resolution to this dispute”.