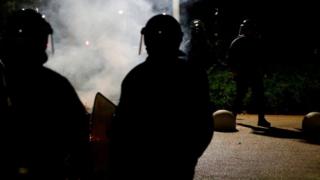 Two police officers in Paris have been suspended after being filmed using an extremely offensive racist slur.

The officers used a derogatory term for North Africans to mock a man they were arresting, and repeated a racist trope about him being unable to swim.

The footage went viral on social media and has sparked outrage across France.

Interior Minister Christophe Castaner also strongly criticised the officers involved, saying there was “no place” for racism in the police force.

He also announced that the IGPN internal police watchdog had been notified and would launch an investigation.

The police commissioner also tweeted: “With the approval of the interior minister, the chief of police Didier Lallemant has asked the head of the national police to suspend the two officers involved in uttering racial comments heard on a video circulated on social media on 26 April.”

The incident took place in the early hours of Sunday morning in the Seine-Saint-Denis suburb, north of Paris.

A man who was suspected of theft had jumped into the river Seine, reportedly to avoid arrest, and was then pulled out by the police.

As they escorted the man to the police van, one of the officers called the man the racist slur and added: “He doesn’t know how to swim.”

His colleague then laughed, and replied: “You should have tied a weight to his foot.”

The exchange was filmed by journalist and anti-racism activist Taha Bouhafs, who then posted it on Twitter. So far it has been viewed more than 1.8 million times.

In response, Mr Castaner tweeted: “All light will be shed on the matter… Racism has no place in the Republic’s police force.”