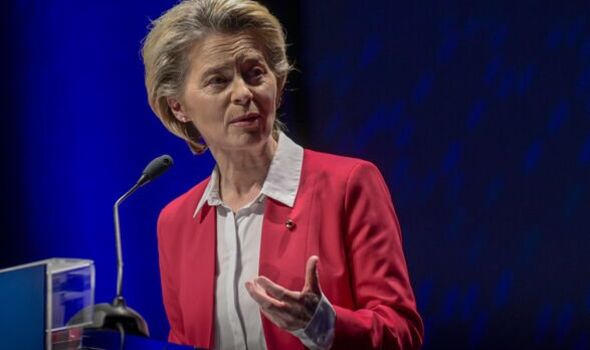 Ms von der Leyen was asked by German newspaper Bild am Sonntag to outline the key points of a scheduled sixth round of sanctions, days after it emerged the bloc has paid almost £30billion to Russia since Vladimir Putin ordered his invasion of Ukraine on February 24.

She explained: “We are looking further at the banking sector, especially Sberbank, which accounts for 37 percent of the Russian banking sector. And, of course, there are energy issues.”

The EU has so far spared Russia’s largest bank from previous rounds of sanctions because it, along with Gazprombank, is one of the main channels for payments for Russian oil and gas, which EU countries have continued to buy despite the conflict in Ukraine.

Ms von der Leyen also said that the EU was working on “clever mechanisms” so that oil could also be included in the next sanctions.

She explained: “What should not happen is that Putin collects even higher prices on other markets for supplies that would otherwise go to the EU. The top priority is to shrink Putin’s revenues.”

Ms von der Leyen, herself a former German defence minister who has been in her post since December 2019, was speaking at a time when the question of Europe’s energy reliance on Russia is high on the agenda.

He explained: “As long as the West continues buying Russian gas and oil it is supporting Ukraine with one hand while supporting the Russian war machine with another hand.”

Speaking specifically about Germany, he added: “While Berlin has time, Kyiv doesn’t.”

Germany has faced sharp criticism from Ukraine and other European nations, including Poland, with accusations it has dragged its feet in terms of phasing out Russian energy.

Robert Habeck, the German economy and energy minister, has announced plans to stop importing oil and coal from Russia this year, and gas by mid-2024 – a sharp contrast with the UK, which has pledged to end all imports of Russian coal and oil by the end of this year, with gas to follow as soon as possible.

The issue was on the agenda when UK Prime Minister Boris Johnson met German Chancellor Olaf Scholz at Downing Street.

However, speaking after it was revealed the EU has spent £29 billion euros on Russian hydrocarbons since the start of the invasion while sending just £830million in aid to Ukraine, Mr Scholz acknowledged that change would take time.

While Germany was investing heavily in renewables for its electricity supply, Mr Scholz said that it would need to import fossil fuels for years to come.

Speaking alongside Mr Johnson at a joint news conference, he said: “It is absolutely necessary that we understand that for the time being, it will be important to get the supply from fossil resources from other places than from Russia.

We are doing so and working very hard to make this happen.”