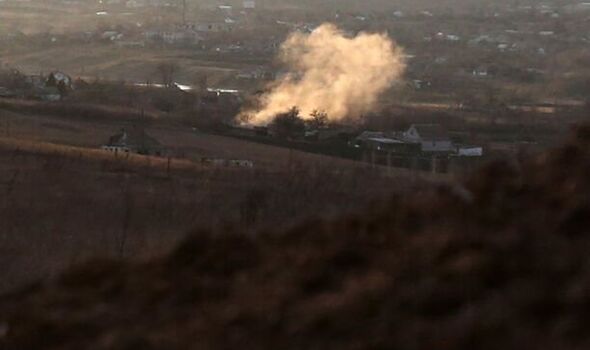 Oleksiy Arestovych, an adviser to Ukraine President Volodymyr Zelensky, said: “The battle for Donbas is underway and is going very cautiously.” But he insisted: “The battle will not go in Russia’s favour.”

Oleksiy Danilov, the besieged nation’s top security official, said Russian forces had tried to break through Ukrainian defences in the Donetsk and Luhansk regions as well as focusing on the city of Kharkiv.

The governor of Luhansk described the situation as “hell” with constant fighting in some cities.

Terrified residents who have been unable to flee were braced for the impending assault while fierce exchanges were already reported in the city of Izyum.

Civilians there told how they had been bombed day and night. They have been without running water and electricity for weeks and reported bodies lying on the streets.”

But Mr Zelensky’s forces continued to fight back with the defence ministry insisting that in the previous 24 hours 10 Russian tanks were destroyed along with 18 units of armoured vehicles and eight units of automotive equipment.

Mr Zelensky confirmed that Putin’s large-scale Battle of the Donbas was under way and fighting on the ground was intensifying.

But he reiterated his warning: “No matter how many Russian soldiers are brought here, we will fight. We will defend ourselves.”

Kremlin troops did manage to seize the frontline city of Kreminna – an administrative centre of 18,000 people in Luhansk – just hours after starting the offensive.

They were attacking “on all sides”, authorities said as they were trying to evacuate civilians.

In Kharkiv, Ukraine’s second city, shells hit the southeastern Nemyshlianskyi district in the afternoon, wrecking one apartment building and damaging others. Three bodies of people apparently killed by shrapnel lay on the pavement.

Resident Fyodor Bondarenko, 79, watching as one body was carried into an ambulance, said: “They are sabotaging the whole city.”

“They know their home terrain and they are fighting for their homes and their own families, and their own citizens. That spirit is something that is really unpredictable from an adversary’s point.”

Other military experts said Putin’s forces would face new challenges with the campaign switching to the Donbas.

General Sir Richard Barrons, former commander of UK Joint Forces Command, said the more open ground in the region and improving weather would give more opportunities for Russian tanks supporting infantry and armoured artillery to get off the roads, unlike in Kyiv.

This would allow Russian forces to better “manoeuvre faster and harder across bigger batches of country”, giving the Ukrainian military a much stiffer problem. He added that Putin’s troops would be approaching Ukrainians from the east as well as from the north and the south to attempt to manoeuvre behind them, posing a much more complex military problem.

But experts at the Institute for the Study of War said the new offensive was “unlikely to be dramatically more successful than previous Russian offensives” though Putin’s forces could “achieve limited gains”.

The US-based think tank said that Russian forces had not taken an “operational pause” necessary to “reconstitute” and properly integrate damaged units withdrawn from northeastern Ukraine.

The Institute insisted that, while Kremlin troops may be able to wear down Ukrainian positions through “heavy concentration of firepower and sheer weight of numbers”, a dramatic Russian offensive success “remains highly unlikely”.

Despite another Russian demand for the last remaining marines defending the all-but-destroyed city of Mariupol to surrender, the Ukrainian troops again held strong. The Kremlin called on those holed up in the Azovstal plant in the port, including “foreign fighters”, to “lay down their arms” and they would be “guaranteed to remain alive.”

Ukraine says at least 1,000 are also sheltering under the factory.

Mariupol, which has been encircled by Russian troops for weeks, has seen the fiercest fighting and most comprehensive destruction since Putin sent troops into Ukraine on February 24.

Tens of thousands of residents have been trapped in the city with no access to food or water and with bodies littering the devastated streets. Ukraine believes that more than 20,000 civilians have died there.

Vyacheslav Gladkov, the governor of the Russian province of Belgorod, yesterday claimed that Mr Zelensky’s forces had launched an attack on his village of Golovchino, wounding one of the residents.

MPs in London were told yesterday that nearly 8,000 mercenaries from the notorious Wagner Group have been deployed by Putin in the conflict but have suffered heavy casualties. Christo Grozev, executive director of the Bellingcat investigative website, gave evidence to the Commons Foreign Affairs Committee that 3,000 members of the private military company were thought to have been killed.

The UK MoD said: “Russian shelling and strikes on the Donbas line of control continue to increase, with the Ukrainians repelling numerous attempted advances by Russians.”

‘No matter how many Russians are brought here, we will fight. We will defend ourselves’