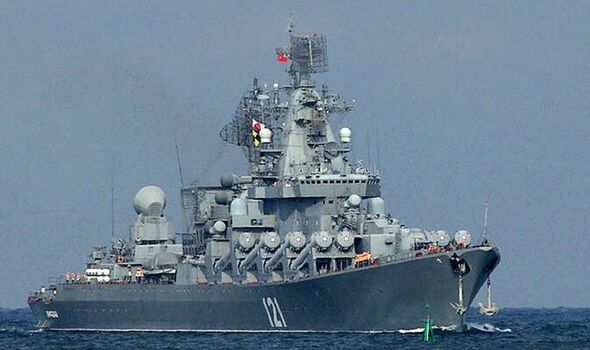 In a huge blow to Vladimir Putin’s war machine, the Moskva was struck by two Neptune cruise missiles off the coast of Odesa.

Ammunition on the Soviet-era guided missile cruiser was then said to have exploded in a fireball. Some of the 510 crew were evacuated, but Ukraine said 300 perished.

The Moskva’s loss is the single largest war casualty inflicted by Ukraine on the Russian military.

Ukrainian presidential adviser Oleksiy Arestovych said after the Moskva was hit: “It burns strongly and with this stormy sea it is unknown whether they will be able to receive help.”

Ukrainian media and intelligence sources claimed to have intercepted distress and Morse code signals after the strike on Wednesday. But Moscow had initially claimed the vessel remained afloat and was being towed to port.

The Kremlin said the crew had been evacuated after a fire on board threatened to ignite ammunition.

It gave no cause for the blaze or details of casualties, saying only it was being investigated. But last night state media admitted it sank.

Destroying the Moskva was all the more symbolic because it had demanded the surrender of 13 Ukrainian troops on Snake Island at the start of the invasion – and received the reply: “Russian warship, go f*** yourself.”

Michael Petersen, director of the Russia Maritime Studies Institute at the US Naval War College, said the Ukrainians “have managed to pull off a not-insignificant victory”.

He said of the Moskva: “It’s getting a bit long in the tooth but it is the symbol of Russian naval power in the Black Sea.”

Sources said they struck the ship on its port side, causing it to partially roll over and take on water.

Meanwhile, drone pictures showed the aftermath of a Ukrainian ambush on Russian armoured vehicles as they crossed a bridge on their way from Kharkiv to Izyum.

In the UK, the Ministry of Defence said Russia was now switching focus to the eastern Donbas region, with Kramatorsk and Kostiantynivka, Donetsk, likely to be targeted.

This came as Ukraine said 197 children had died since the war began.

Meanwhile, nearly a million Ukrainians who fled abroad have gone home. The State Border Guard Service said the total figure was 870,000 with 25,000 to 30,000 returning each day.