A strong earthquake has struck Croatia and its capital Zagreb, triggering widespread damage and panic across the country. The huge 5.3 magnitude quake, which could be felt across five different European countries, has left at least one person dead. A 15-year-old teenager was pronounced dead after being pulled from the rubble of a collapsed building.

The quake hit the country amid the ongoing coronavirus crisis that has wreaked havoc across Europe and has mandated social distancing guidelines.

According to local residents, the earthquake struck just as more restrictive measures to combat coronavirus were coming into effect.

In the wake of the earthquake, Croatia’s Interior Minister Davor Bozinovic urged people in the streets to keep social distance from each other.

The country has so far struggled to contain the spread of coronavirus, with at least 206 confirmed cases of the virus and one death.

JUST IN: Idris Elba’s wife confirms she also has coronavirus 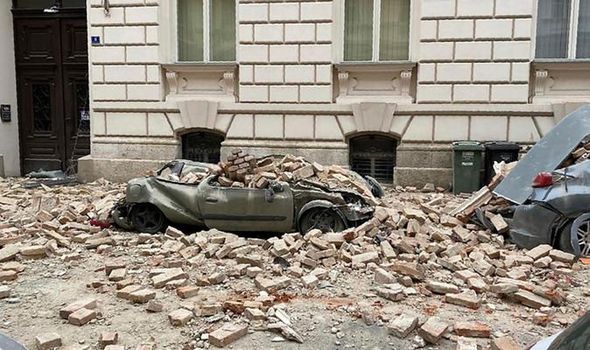 Images from the destruction revealed cars completely crushed under the falling debris and collapsed buildings.

Electricity and internet services were also cut off as a result of the devastation.

The panic send many people into the streets, and the resulting damage caused several fires across the country’s capital.

The Zagreb Fire Department said the firefighting and rescue operations were ongoing at several locations.

The Institute for Urgent Medicine, an emergency hospital, confirmed that one child had been admitted with head injuries from a falling roof.

One witness said: “It lasted over 10 seconds. By far the strongest I have ever felt.”