Speaker Nancy Pelosi, under pressure from moderate Democrats to work toward a deal with the White House, laid the groundwork for action on a stimulus bill.

Rio de Janeiro has postponed its annual Carnival parade for the first time in over a century over pandemic concerns. 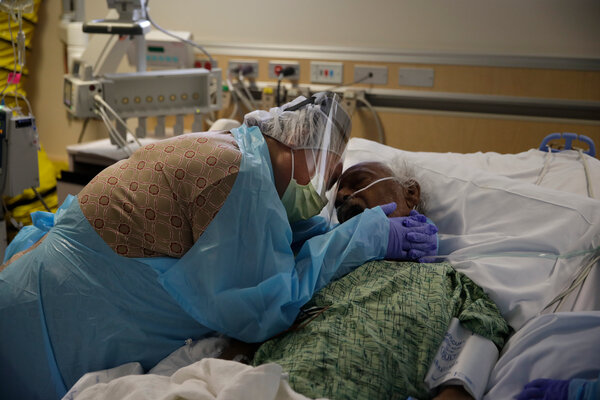 More than seven million people in the United States have now been infected by the coronavirus.

Though the milestone, reached on Thursday according to a New York Times database, is sobering, it comes as infections in much of the country have in fact been slowing.

The United States has been averaging about 41,500 cases daily, down from the pandemic’s midsummer peak, though states in the Midwest and West are seeing case numbers rise.

In California, officials recorded their 800,000th case since the start of the pandemic. That is more than any other state, but the figure is cumulative, and does not capture the state’s current situation.

With health officials in California testing enough of the population to contain the spread of the virus, the state is reporting a relatively low number of new cases a day, according to the Times database.

More broadly, California the largest state in the country, has had significantly fewer virus cases per capita than other states like Florida, Louisiana and Mississippi. California currently ranks 36th among states and territories in known new cases per capita over the past seven days, and 26th in the total number of known cases per capita since the start of the pandemic.

It was less than a month ago that the United States reached six million cases, on Aug. 30. It had taken more than three months for the country to record its first million.

The story of how California came to lead the country in the total number of cases goes back to the spring and summer months, when new cases surged across the Sun Belt states. New cases in California peaked at the end of July when the seven-day average doubled from what it was a month earlier.

It was a far cry from the early days of the pandemic, when most virus cases were in the Northeast and Washington State, and California emerged as a national role model when it became the first state to issue a stay-at-home order.

But the number of cases there began to climb when that order was lifted.

Like health officials in many Sun Belt states, the authorities in California attributed the spike to a premature easing of restrictions. In early July, when virus-related hospitalizations in California were up by more than 50 percent over a two-week period, Gov. Gavin Newsom halted reopening plans and ordered bars and indoor dining closed for most residents.