A surge of infections in the Southwest and the Midwest is partly driving an uptick in cases nationally. The eight remaining members of the Supreme Court are expected to hear arguments next month via telephone.

The Times obtained a memo dated Sept. 15 in which Alex M. Azar II, the secretary of Health and Human Services, barred the nation’s health agencies, from signing any new rules regarding the nation’s foods, medicines, medical devices and other products, including vaccines. 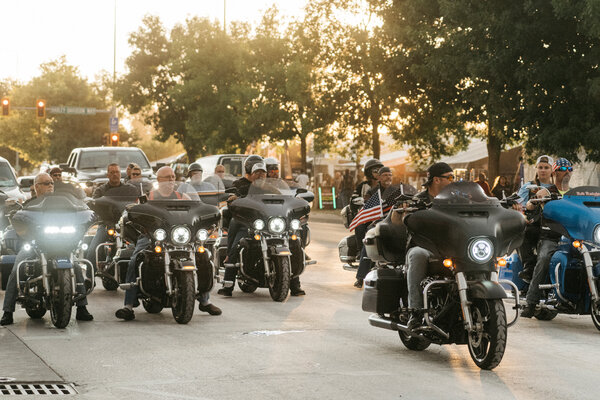 A month after Sturgis, another motorcycle rally this weekend in Missouri is worrying health experts.

A motorcycle rally in a resort area of Missouri is raising fears that the thousands of people who are expected to flock to the event this weekend could spread the coronavirus during the festivities, which include stops at bars and live concerts.

The 14th annual BikeFest Lake of the Ozarks, which began on Wednesday and runs through Sunday, comes a month after a larger motorcycle rally in Sturgis, S.D. led to a surge of cases in multiple states.

Much like Sturgis, organizers for Bikefest promised, on the event’s website, that motorcycle fans “from all over the United States will be rumbling their way” there. The rally reportedly drew 125,000 people to Central Missouri last year, and plenty of people arrived this week, too, few of whom seemed to be worried about spreading or contracting the virus.

“You can ask any biker, or whatever, anything going on in the world, it ain’t gonna stop us riding,” one attendee told a local television network, KYTV, at the rally.

But public health experts fear what could come from thousands of people descending on the scenic reservoir to chat, drink and — in a contest created by organizers — visit a group of 24 restaurants, bars and wineries for a chance for a chance to win a Harley-Davidson motorcycle.

“It’s almost an explosive petri dish to me,” Steve Edwards, the president of a hospital network in Missouri, told KOLR, a local television network.

The experts’ fears are not unfounded.

South Dakota saw a sharp increase in virus cases after the 10-day motorcycle rally in Sturgis ended Aug. 16 — and nearly 2,000 new cases in the past week. Cases linked to the rally have been reported in a number of other states; Minnesota alone has confirmed more than 50 cases traced back to the rally, officials said, and one man died.

Missouri, where the current motorcycle rally is being held, is reporting an average of more than 1,600 cases daily, its highest total of the pandemic. Much of that case growth has been driven by college towns and smaller cities. Though counties around the Lake of the Ozarks have seen some of their highest daily case totals recently, all are averaging fewer than 20 cases daily.

Another motorcycle festival, the Leesburg Bikefest held every year in Leesburg, Fla., outside of Orlando, announced this week that it would not be holding the event because of the virus. The festival had already been rescheduled to November, from April, because of the pandemic.