India has reopened the Taj Mahal – despite the country recording 87,000 new coronavirus infections in a single day.

The famed monument to love had been closed for six months as part of lockdown measures – the longest it has ever been shut.

The number of daily visitors will be limited to 5,000, compared with an average of 20,000 before the pandemic. 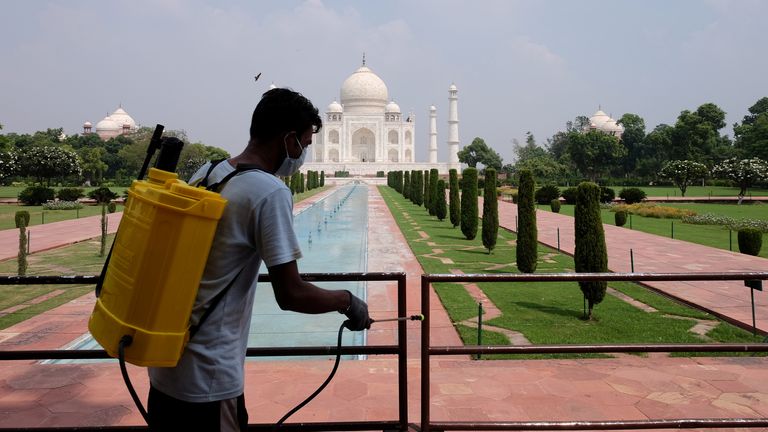 The 17th-century marble mausoleum was built by Mughal emperor Shah Jahan to house the tomb of his favourite wife, Mumtaz Mahal.

COVID-19 protocols are being followed at the iconic landmark, including temperature checks at the entrance and social distancing throughout. Wearing a mask is also compulsory for visitors.

A Chinese tourist and a visitor from Delhi were among the first people to enter.

One early visitor, Aditya Diksha, drove for 12 hours to pay a visit with his friends. “It is the first time in six months we have been out, so it feels good,” he said.

It comes as Prime Minister Narendra Modi faces pressure from businesses to relax lockdown restrictions amid the deepest economic contraction in decades.

India is close to becoming the country with the highest number of coronavirus cases. The nation of 1.3 billion people currently has a total of 5.49 million infections – second only to the US on 6.79 million.

Relative to its population, COVID-19 fatalities in India are still low compared with countries such as the US, the UK and Brazil – but the economic impact has been significant.

Fewer than 300 tickets were bought for the Taj Mahal’s first opening day – a sign that the tourism industry is struggling.

The Association of Tourism Trade Organisations India (ATTOI) said foreign tourists are unlikely to return until at least April, while domestic tourists are being deterred by a confusing system of regional lockdowns and quarantine rules.

“People don’t want to go on holiday,” said Manu PV, the ATTOI’s secretary. “They are very worried. There is the fear factor.”