The Malaysian government’s department for women has apologised after it released series of online posters telling women how to keep their men happy during its COVID-19 lockdown.

Titled ‘Household Happiness’ the tips posted on Facebook and Instagram included giggling coyly instead of nagging, not allowing your appearance to slip and making sure the home is clean.

One suggested women avoid being sarcastic if their partner was not helping with the housework. 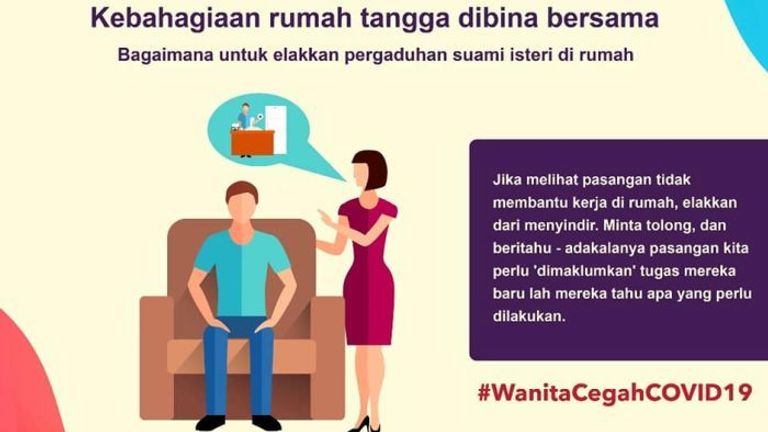 The online posters, with the hashtag #WanitaCegahCOVID19 (Women Prevent COVID-19), were condemned by women’s rights groups who said the campaign could worsen gender stereotypes and possibly encourage domestic violence.

The Women’s Centre for Change (WCC) said the Facebook and Instagram posts reinforced negative gender stereotypes of both women and men.

“It implies that women are ultimately responsible for getting domestic chores done when the duty should be a shared one,” it said in a statement.

“It makes women the ones who need to persuade their partners to chip in, and worse, asks that women downplay a rightful request by using infantile language and mannerisms – so as not to offend the apparent sensitivities of men.

“The implicit message is that men are allowed to slack off on domestic work and it’s women who must follow up with them – but they should only do so nicely.

“In short, it sends the message that women are subordinate in the home and are not allowed to function as equals to men.”

In a statement the Women, Family and Community Development Ministry said the aim had been to share methods and practices to sustain positive relationship within a family while women are working from home.

Director-general Datuk Saidatu Akhma Hassan said: “We are sorry if some of tips shared were inappropriate and touched on the sensitivities of some parties, and we will be more careful in the future.”

Three of the four posters have now been removed from social media.

Malaysia has shut schools and non-essential shops and imposed tight restrictions on travel and movement in a bid to reduce the impact of COVID-19.

Local media reports suggest a government helpline to aid domestic abuse victims and vulnerable children has had double its usual number of calls since the start of the lockdown.