Doctors at what is now Spain’s largest hospital have told Sky News they are winning the battle against the coronavirus “little by little”.

The IFEMA exhibition centre in Madrid has been rapidly converted into a frontline hospital in the COVID-19 fight.

It will soon have the capacity to treat 6,000 patients and in the massive hangars there are beds as far as the eye can see.

Medical director Antonio Zapatero said when the disease hit it was like a healthcare “tsunami” and last week 3,000 patients in the Madrid area alone were waiting for beds – but the situation is now improving.

He said: “We are winning this war but little by little. It’s a very hard situation.

“In my career in internal medicine I haven’t seen any time I could suppose this would happen. There are a lot of patients with complications and there is a mortality rate of seven or eight percent.” 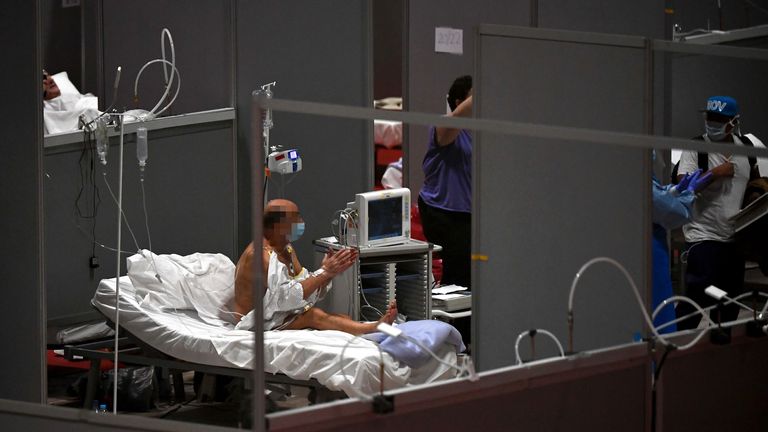 Fifty-year-old Jonan Basterra was taken to hospital 10 days ago.

Although he’s still under observation, he’s hoping to be discharged soon and told me, via videophone, that the country’s improving health situation was thanks to the strict lockdown measures even if it is at the expense of the economy.

He said: “Lives are much more important than money. Money we make it but lives do not return. But between saving lives and saving the economy I think is pretty, pretty clear.”

The daily grim statistics in Spain also bear out the crisis is slowly being brought under control. In the last 24 hours, 637 people have died of COVID-19 bringing the total in the country up to 13,055.

They are still massive numbers but the number of dead has fallen for the fourth consecutive day in a row suggesting the so-called curve is starting to flatten.

Certainly health officials in the country and the government are optimistic.

Spain’s lockdown, which is one of the strictest in Europe, has been extended until the end of April.

The majority of Spaniards live in apartments and can’t go out even for exercise.

Social living here is on hold for the moment.

Shouting from balcony to balcony is now the music of community life.

On street level, the capital is ghostly quiet, apart from essential shopping. The day and night will be spent inside for most people.

Breaking the lockdown is a serious offence and throughout the day when we were filming we were stopped and our documents were checked to make sure we were legitimate key workers.

With nearly three weeks of lockdown still left, the question now is how can Spain – a country haunted by the coronavirus – reopen its economy without causing another spike in infections.

The government is leaning towards a gentle return to normal.

Prime Minister Pedro Sanchez has said some economic restrictions could soon be eased and some non-essential key workers allowed to return to work.

There’s also a desire to make wearing a mask in public mandatory but at the moment such a measure is unworkable as there is a national shortage.