Home » World News » Coronavirus: Between 30 and 50 funerals a day being held at Spanish church

“It is worse than a war” – that’s how families burying their dead in Spain’s worst hit region are describing the impact of the coronavirus.

At one of Madrid‘s largest cemeteries, La Almudena cemetery, in the space of little over an hour we watch as many as six funerals take place.

Six broken families. And it’s like this hour after hour. Day after grim day. 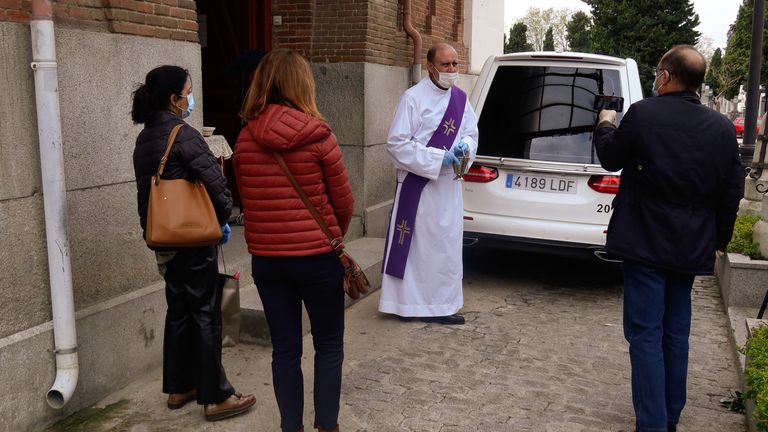 The Rumbero’s have gathered to bury their 90-year-old mother who died of coronavirus in a care home two weeks ago.

They say she would have wanted a big funeral with all her family and flowers – lots of flowers.

Under the lockdown large gatherings are prohibited.

The daughter of the deceased, Pilar Rumbero, says what’s happening “is too hard… it is worse than a war”.

She explains that only three family members are allowed but her mother had so many relatives and friends and they are unable to take part. 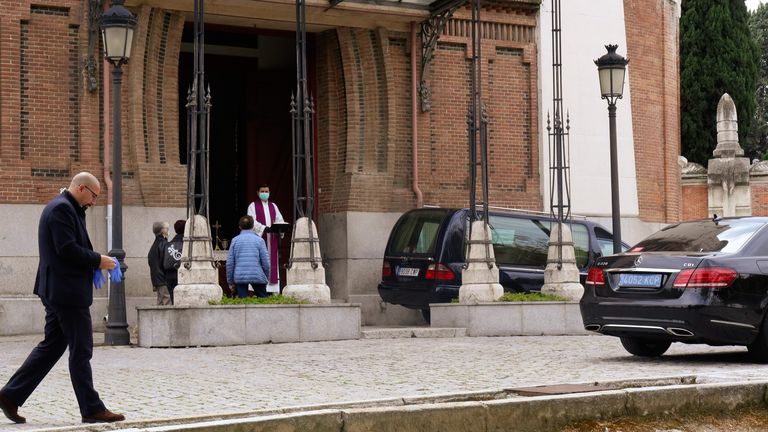 The procession of hearses pulling up to the church is constant. As one leaves another arrives, there isn’t much time for goodbyes.

Each coffin is wrapped in plastic to protect the living. It is difficult to give the dead the dignity they deserve in a pandemic.

The priest, Javier Fuenmayor, flicks holy water at the end of each service and then it’s over and another one begins.

“But with this aggravating factor [coronavirus] the number has increased, dependant on our capacity, to between 25 and 30 people. That’s without factoring in those that are sent to crematoriums and that could be between 40 and 50 people. We are at our limit.”