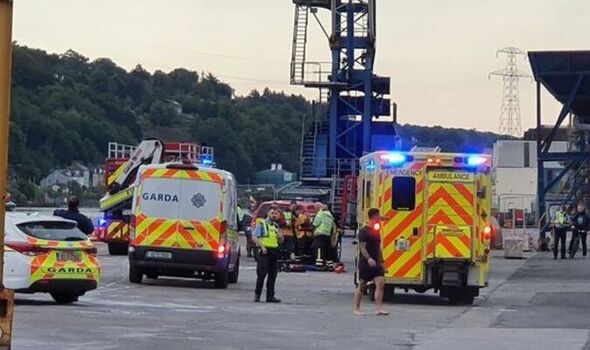 Emergency services were called to the scene at Kennedy quay in Cork earlier this evening.

According to Cork Live eyewitnesses could only watch as the car hurtled into the river.

They said that two passengers were able to free themselves from the car and swim to safety.

However, it is feared that the other passenger was trapped in the car which was sinking deeper into the water.

The incident was first reported around 9pm this evening.

Emergency services are treating the two passengers who have escaped and a search operation has been launched for the third.

A video taken at the scene showed a helicopter hovering at emergency vehicles rushed to the quay.

It is believed that the incident happened before 9pm this evening.

This is the third such incident that has occurred at the quay in Cork in recent years.

Last year and in 2020 similar incidents occurred when cars drove into the water.

On both occasions a body was found in the water.

The Garda confirmed that two children, who were both recovered from the water, were taken to Cork University Hospital for non life threatening injuries.

A Garda spokesman told The Irish Examiner that the Garda were still at the scene awaiting specialist assistance.

He said: “An Garda Siochana remain at the scene and are awaiting support from specialist services to conduct further examinations of the vehicle.”

The spokesman added that officers are investigating “all the circumstances” of the incident.

According to The Irish Examiner, Mallow Search and Rescue are at the scene to assist while a crane has also been deployed at the quayside.

The Coastguard 117 helicopter from Waterford, the Navy and Cork Missing Persons Search and Recovery are also involved in the rescue effort.