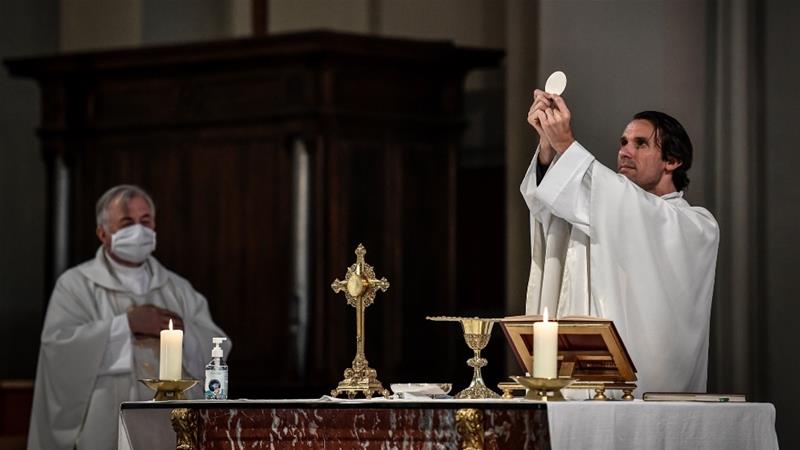 French churches have held their first Sunday masses in more than two months after the government bowed to a ruling that churches, mosques and synagogues should be reopened, nearly two weeks into the relaxation of its shutdown.

France’s Council of State, which instructs the government on legal issues, ordered it last Monday to lift its sweeping ban on all religious services, in place since the lockdown.

The ruling said such a ban on freedom of worship caused “damage that is serious and manifestly illegal”, ordering the government to lift the ban within eight days with safety preconditions.

Worshippers will have to wear masks, disinfectant gel must be provided, and seating will need to be organised to ensure people keep a safe distance from each other.

At one church in Neuilly-sur-Seine, just outside Paris, some worshippers arrived on short notice on Saturday morning, having heard that mass would be celebrated.

“We knew 30 minutes in advance, we ran to come,” said Eliane Nsom, who went with her three daughters. About 40 people attended the service.

France’s mosques nevertheless called on Muslims to stay home to celebrate the Eid al-Fitr holiday, marking the end of the Muslim fasting month of Ramadan and that they would gradually resume services from June 3.

France’s Jewish community took a similarly cautious line. Chief Rabbi Haim Korsia stressed that believers should not “rush towards the reopening of the synagogues”.

The government has had to fight a series of legal battles to control the pace of the loosening of France’s two-month lockdown.

It has refused Paris mayor Anne Hidalgo’s call to reopen the capital’s parks and gardens over fears this could accelerate infections in the city, already hard-hit by the virus.

Many of its experts judge that it is too soon to say the virus has been brought under control in France.

Also on Sunday, France said it was relaxing its border restrictions, allowing migrant workers and family visitors from other European countries.

But it will require a 14-day quarantine for people arriving from the United Kingdom and Spain, based on reciprocity.

Starting on Monday, France is abandoning border checks installed in March and switching to spot checks in various places, according to a government statement.

Travellers from outside Europe are still banned until at least June 15, except for French citizens.

The latest figures for those seriously ill from the virus fell on Saturday, with 1,665 patients still in intensive care for the coronavirus – 36 fewer than 24 hours ago.