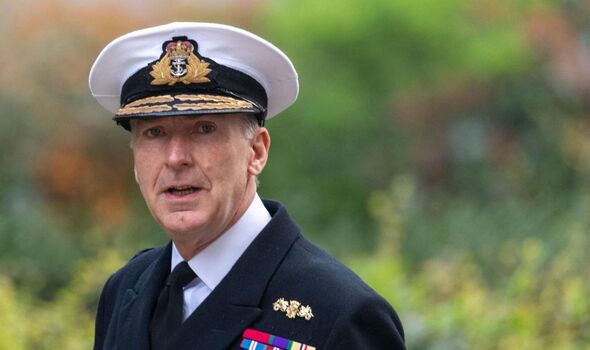 China will soon become a serious threat to the West’s security in the Atlantic, the head of the UK’s armed forces has warned. He also suggested that a British aircraft carrier may need to be regularly sent to East Asia.

Admiral Sir Tony Radakin, the Chief of Defence staff, said due to the melting polar ice caps, a shipping route would open up from China to Europe.

Beijing could exploit the lane to flex its military prowess, he explained.

The heads of MI5, MI6 and GCHQ have issued warnings about the threats posed by China, which the admiral echoed.

He criticised Beijing for being a “tacit supporter” of Russia’s war in Ukraine.

Mr Radakin also said that Beijing was “substantially increasing” its nuclear arsenal, in a call for the Royal Navy to work on its Trident nuclear fleet.

They will be replaced by four Dreadnought-class submarines early in the next decade.

Mr Radakin said the UK should get over its “mild embarrassment” about having nuclear weapons because the war in Ukraine proved the necessity of the Trident deterrent.

He said the “totemic” AUKUS deal signed between the US and Australia would help the UK in allowing it to increase its fleet and “grow our submarine numbers”.

He said: “There is something very British in our approach to having the bomb — mild embarrassment.

“And yet perhaps one of the starkest lessons of the past year has been our extended nuclear deterrence. It has protected us and our allies, allowing us to resist coercion and continue to do what is right.”

At his first RUSI lecture last year after being appointed to high admiral in November, he warned that the West’s worse-case assessments of the build-up of Russian troops on the Ukraine border suggested President Putin was preparing for an invasion.

“If the headlines the following morning seemed alarmist at the time, they don’t now,” he reflected.

Mr Radakin said Russia was now losing the war despite firing “millions” of artillery rounds against a “modest military power”.

He added: “Russia faces a critical shortage of artillery munitions.

“This means that their ability to conduct successful offensive ground operations is rapidly diminishing. There is no mystery as to why this is the case. Putin planned for a 30-day war but the Russian guns have now been firing for almost 300 days.

“The cupboard is bare. Morally, conceptually and physically, Putin’s forces are running low.”

Mr Radakin said the war had made Russia “weaker but more vindictive”. He warned Europe about its overreliance on US military spending.

“Were the US to contemplate a more radical pivot to the Indo-Pacific it would cost Nato’s European nations more than $300 billion over ten years to match US current investment in our security,” he said.

Mr Radakin explained why the US may need to focus on containing the threat from China. He said global warming could help Beijing expand its military presence.

The melting of the ice caps would mean “surely China’s military forces will start to reach into the Atlantic”, he added.

He concluded his lecture: “The alternative to thinking big, and to thinking on a global scale, is that we become an introspective, cautious nation, that looks the other way,” he said. “But we’ve seen what happens when countries look away. Authoritarians are emboldened. Rules get broken, economic turmoil and global insecurity follow.”