The Atlantic Hurricane season has historically devastated communities in the Americas, especially those around Latin America and the Caribbean. In 2022, the season delivered little in terms of high-powered storms despite having begun in June, with only three detected so far. But that could soon change, as data has revealed a list of high exposure areas likely to receive the initial brunt from several potential systems.

The latest tracking information from the National Hurricane Centre (NHC), a wing of the US-based National Oceanic and Atmospheric Administration (NOAA), reveals four tropical systems looming in the Atlantic.

They include two tropical depressions, one tropical storm, and a hurricane currently tearing through the oceans off the US east coast.

The only hurricane, Fiona, is currently several hundred miles off the coast of North Carolina and en route to Atlantic Canada, moving north at around 74mph after having killed eight people in the Caribbean.

Tropical Storm Gaston, currently looming over the Portuguese Azores in the East Atlantic, is now petering out.

But the NHC has warned island locals to take care during heavy rainfall that could cause landslides. 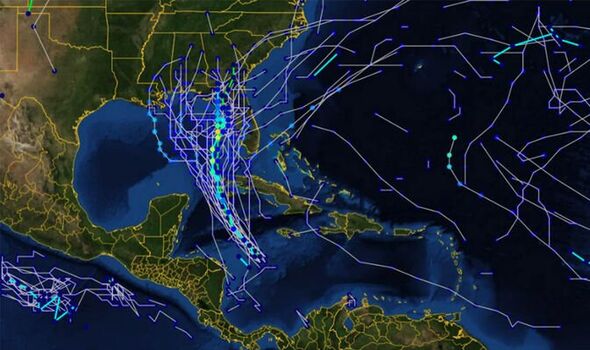 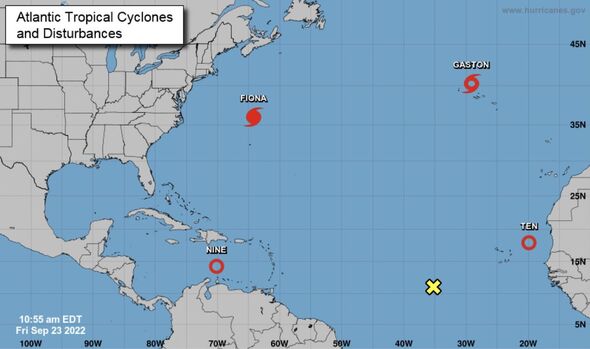 The two tropical depressions, Nine and Ten, have now largely petered out, with wind speeds reaching just over 39mph around Cuba and the Caribbean and just under this off the coast of Mauritania and Western Sahara.

While among the least dangerous systems active in the Atlantic today, tropical depression Nine has struck a particularly storm-prone region.

Recent data compiled by the INFORM Risk Index, which assesses risks for humanitarian crises, shows countries in South and Central America and the Caribbean have exceptionally high storm exposure rates.

Maps created by Statista show that five nations below the Gulf of Mexico see the most storms.

Statista provided them with scores ranging from 0.0 to 10.0, with 10.0 outlining the highest risk of exposure. 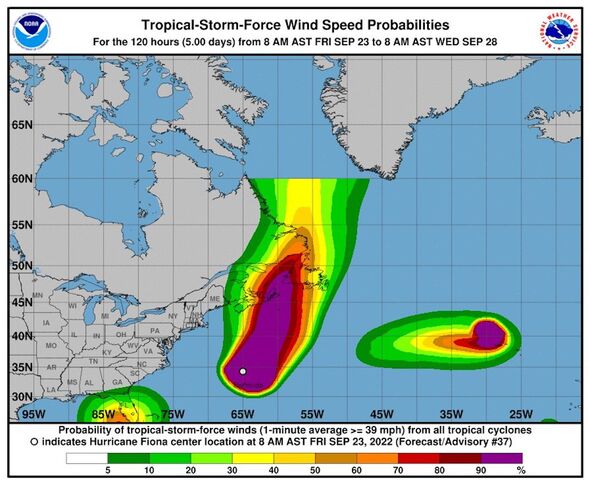 The following five countries have the highest exposure scores:

Colombia, Venezuela, Honduras and Guatemala are slightly less at risk, with a score of between 4.0 and 5.9.

Panama, Costa Rica, Nicaragua and El Salvador – despite being close to several high-risk areas – are the least at risk.

Those four nations have lower exposure scores, between 0.0 and 3.9, at the bottom of the scale. 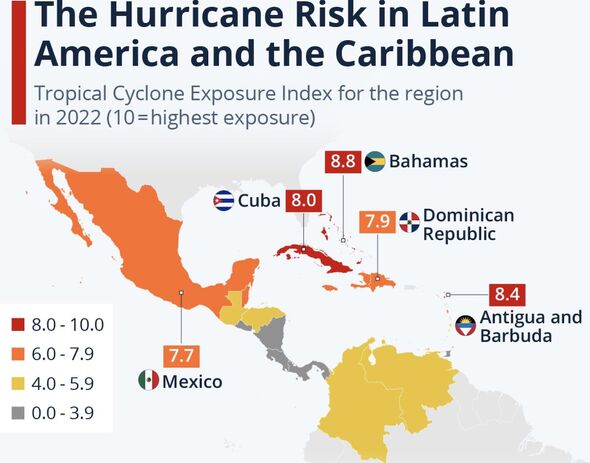 Forecasters have warned people in high-risk areas will need to prepare for additional activity over the latter half of the hurricane season, which ends in November.

A tropical wave named Invest 98L has taken route in the southeastern Caribbean Sea and is making a B-line for the Gulf of Mexico.

Meteorologists with AccuWeather have predicted the wave could become a fully-fledged tropical storm by this weekend and a hurricane next week.

Storm-prone Gulf regions and the Florida coast are at risk from the coming storm, they added.

Jonathan Porter, the chief meteorologist with AccuWeather, said: “This is the most significant threat for the US mainland we’ve had this hurricane season.”

Dylan Federico, a meteorologist with US channel WINK News, concurred with the forecast.

He tweeted: “Spaghetti models are in agreement that Invest #98L will track westward across the Caribbean over the next several days.

“By early next week, we could be talking about a hurricane in the NW Caribbean. Everyone along the Gulf Coast needs to pay attention.”

The NOAA believes hurricane season will only become more intense in the remaining months of 2022.

In August, NOAA Administrator Dr Rick Spinrad said: “We’re just getting into the peak months of August through October for hurricane development, and we anticipate that more storms are on the way.

“NOAA stands ready to deliver timely and accurate forecasts and warnings to help communities prepare in advance of approaching storms.”

The NOAA has predicted that before November, people can expect 14 to 20 named storms creating wind speeds greater than 39mph, six to 10 of which could become hurricanes.

Between three and five of those could become named hurricanes boasting winds of 11mph or greater.