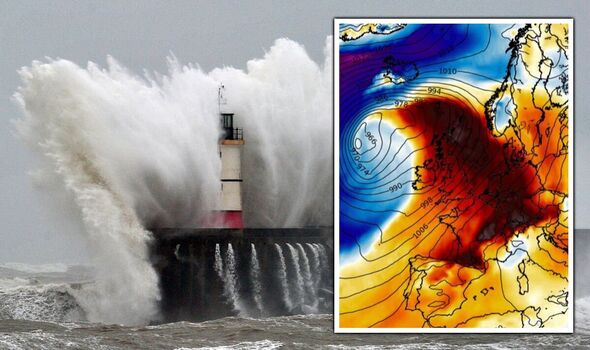 The UK weather will make a dramatic U-turn today as -10C snowfields thaw under a tropical plume sweeping in from the Atlantic.

The nationwide mega-melt will be driven by warm fronts dragging air in from the Azores and the Canary Islands.

The mercury could hit 14C across southern Britain through the start of the week with even Scotland and the north brushing double figures.

But low pressure will whip up wind and rain through the start of this week, prompting government forecasters to issue another raft of weather alerts.

The Met Office has warned to brace for torrential downpours to trigger floods in parts while exposed regions battle 50mph gusts.

Met Office meteorologist Alex Burkill said: “Monday is going to be cloudy and wet with outbreaks of rain, heaviest particularly towards the south where we have a rain warning in force into Tuesday.

“Because rainfall totals could really build up, so some localised flooding is possible.

“It will stay cloudy for most, and strong winds will persist with gusts of 40 to 50mph in exposed parts, but despite the cloud and the rain it is going to be very mild.

“Clearer and drier weather will feed into Scotland and northern England overnight into Tuesday morning, so there is the chance of a touch of frost.

“Towards the south it is staying cloudy and wet with a warning persisting into Tuesday.”

The Met Office has issued a severe weather warning for more than five inches of rain across southern Britain before Tuesday morning.

The region faces flooding of homes and businesses, travel chaos and loss of power supplies.

But by Monday afternoon the big freeze which has gripped the nation for the past week will be a distant memory.

Jim Dale, meteorologist for British Weather Services, said: “Monday is going to feel like a completely different day, and while there will be rain, it is almost going to be a T-shirt day.

“We are expecting temperatures of 13C or 15C across southern Britain with highs of 10C or 11C in the north.

“This is because of low pressure in the Atlantic bringing in south-westerly winds and the track of travel for these will have been from the Canary Islands and the Azores.”

However, Britons should not put the winter coats away with the risk of cold weather returning ahead of Christmas, said Mr Dale, author of ‘Weather Or Not?’.

He added: “Tuesday will be a bit of a nothing day, and then there are signs of things turning colder again.

“It is unlikely to be as cold as we have just seen, but we may be back into the territory of seeing some wintry showers.”

With days to go and temperatures threatening to plunge, bookies are still hedging their bets on festive snow.

William Hill spokesperson Lee Phelps said: “The word is that Arctic air could return on Christmas Eve or even Christmas Day and with that in mind, we think there is now a serious chance of a white Christmas in the UK.”

Exacta Weather forecaster James Madden added: “As we head into Christmas week it is becoming increasingly likely that we will see a return to some rather cold conditions and snow in time for Christmas.”