Joe Biden awkwardly walked off stage with his wife Jill Biden and three of his granddaughters after attempting to speak into a turned off mic. The video was taken at one of his final rallies on US Election 2020 day before retreating to await the results of the vote. Mr Biden can be seen taking off his black mask and approaching the mic to speak but then retreating as he realised the microphone was off.

The video, shared on Twitter by Fox News anchor Sean Hannity, sparked hilarity among his followers as they mocked the former vice-president for the blunder.

One user even suggested Mr Biden’s footage showed him delivering the “best speech he’s given.”

Another user wrote: “They should’ve turned his mic off months ago.”

And another said: “Hahaha, perfect! Another momentous Joey postcard capture!” 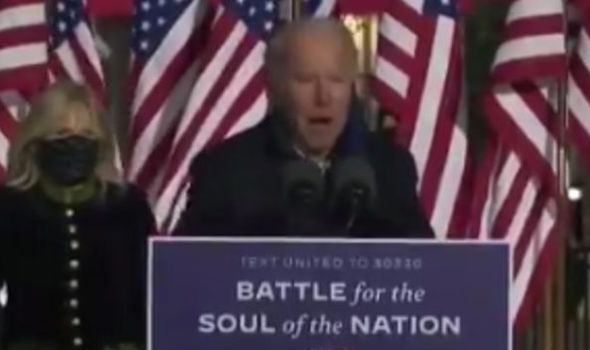 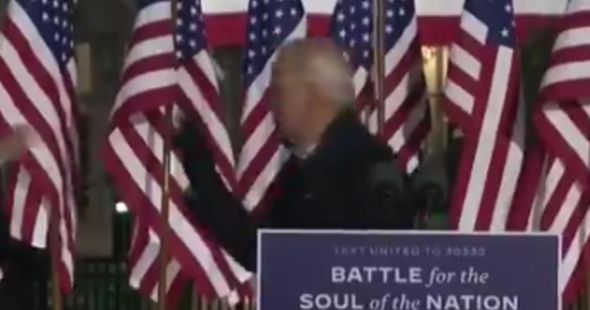 The Biden campaign has been plagued by an awkwards moment, including one last month in which Mr Biden appeared to require his wife Jill’s help to remember the name of the US President.

During one of his last campaign events, the former vice-president appeared to introduce his granddaughter Natalia as his late son, Beau Biden.

Speaking to supporters, he said: “I want to introduce you to two of my granddaughters.

“This is my son Beau Biden who a lot of you helped elect to the senate in Delaware.”

Mr Biden then attempted to correct himself as the crowd continues to murmur, saying: “This is my granddaughter Natalie.

“No wait I have got the wrong one.”

And last month Mr Biden appeared to confuse US President Donal Trump with his predecessor George W. Bush during a virtual event.

However, Biden supporters suggested the former vice-president had not been referring to the ex-US leader but rather to the event moderator, George Lopez.