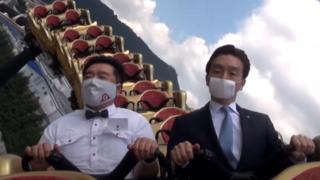 Many people might find it tricky keeping quiet through a entire roller coaster ride, but one Japanese theme park wants you to do that – and more.

It asked riders to avoid screaming when they go on its rollercoasters, to minimise spreading droplets, and instead “scream inside your heart”.

And to encourage people to play along, it’s getting riders to put on their most “serious face” for the ride photo.

They can share their photo online in the #KeepASeriousFace challenge, and those who do best will be given free day passes.

Here are some of the attempts:

This guy definitely has our vote.

The theme park will be running the challenge until 17 July, so if you’re in Japan and can hold a serious face under any circumstances – now’s your chance.

The no screaming rule – in addition to the mandatory use of masks – is meant to stop potential virus-carrying droplets from flying out of your mouth at 80mph per hour.

Clearly, it’ll be impossible to enforce this ruling – and according to executives who spoke to the Wall Street Journal, violations will not actually be punished.

But it’s all part of measures being taken by themes park to give customers the confidence to return after the shutdowns, and assure them their safety is being taken seriously.

In response to suggestions that it was impossible not to scream on a rollercoaster, the park previously released a video of two executives riding in silence, to show it can be done.

In the surreal video, which has since gone viral, both executives are seen formally clad and in masks – one of them is even wearing a full suit and tie. He slowly adjusts his hair after the roller coaster plunges down and looks almost bored by the entire exercise.

The other clenches the safety bars tightly. You can see their bodies shaking as the ride goes on its twists and turns – but they remain absolutely stoic and silent throughout the four-minute video.

At the end of the video a message appears: “Please scream inside your heart”.

Japan for months had a relatively low infection rate, though virus cases in the capital Tokyo have surged in recent days.

The country has reported more than 20,000 virus cases and a death toll of 982, according to Johns Hopkins University.