Much of Europe is dry at the moment, sunshine by day and rather chilly by night. However, according to BBC meteorologist Matt Taylor, to the south east of Europe, an area of cloud has been producing some torrid conditions across parts of Bulgaria, Romania and particularly into Greece. He noted that there are now red weather warnings out for the strength of the wind, heavy rain and some snow as well.

Mr Taylor told viewers: “This area of cloud has been producing some torrid conditions for parts of Bulgaria, Romania and particularly Greece where we have had some red warnings out for the strength of the wind, some heavy rain and some snow as well.

That continues through the night and into Tuesday.

“On Tuesday afternoon, across the eastern half of the Med, the conditions will be slowly improving across the Balkans and across Greece.

“There’ll be increasing amounts of sunshine, but towards Crete and across the islands of the eastern Aegean.” 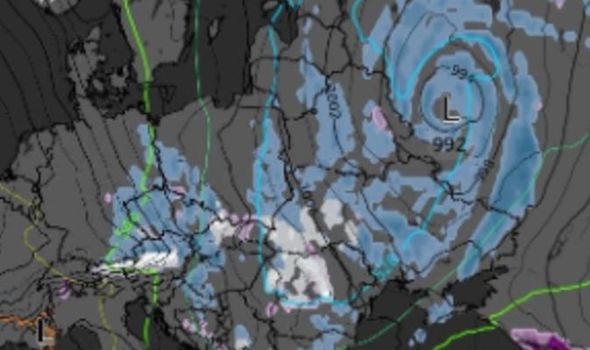 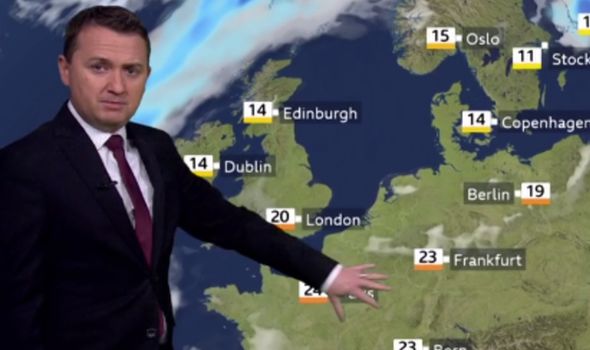 He continued: “There are still some pretty damaging winds to come, and further outbreaks of rain.

“Some heavy, thundery showers are expected to the north and north east of Spain on Tuesday.

“It will be sunnier to the south of the country.

“It will feel pretty warm in the sunshine for this time of year across much of central Europe.” 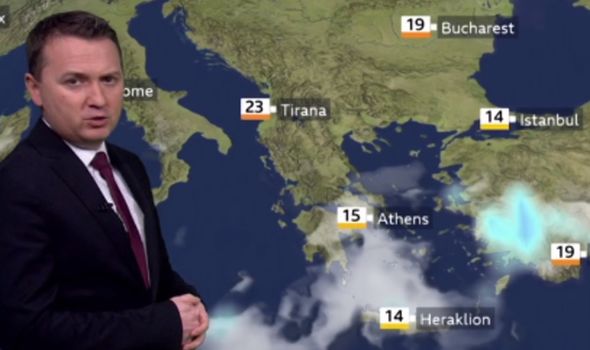 The weather presenter added: “However, we will see some rain, sleet and snow spread across Finland through the day.

“Into Wednesday, rain, sleet and snow return to parts of Norway.

“There’ll be more snow to come to Iceland after the recent very wintry spell.” 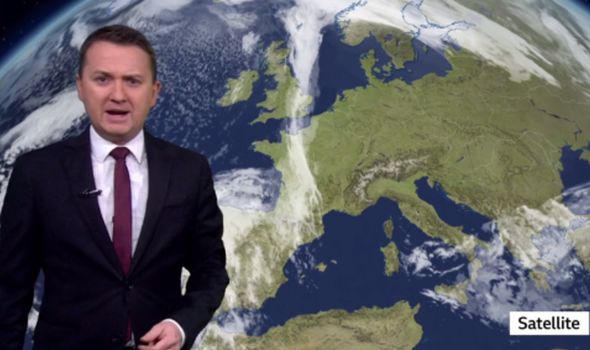 Mr Taylor also said: “Towards the west of Spain and Portugal, cloud will increase and outbreaks of rain will push in.

“But for much of Europe, it will be blue skies overhead.

“Taking a look ahead over the next few days for London, increasing amounts of cloud are turning the weather cooler.

“That cooler weather will hit Paris through this weekend with some outbreaks of rain, more showers to come to Madrid.

“Further east, it’s set to turn chillier in Moscow with temperatures back down into single figures after lifting up to 16 on Thursday.”