BBC Weather: Temperatures set to rise in parts of the UK

Speaking to BBC Breakfast weather presenter Carol Kirkwood warned of a mixed day of weather for the UK on Tuesday. It will be a murky start with outbreaks of sun but for many cloud will linger. But temperatures are expected to rocket to around 24 degrees in some areas later on Tuesday. Through the course of the week, the weather will remain the same but temperatures will cool off slightly.

Ms Kirkwood said: “For much of England and Wales it is a brighter start.

“We will see some brighter breaks but the risk of showers developing later.

“We have also got some low cloud across parts of northern Scotland and the north of Northern Ireland.

“But for Scotland, Northern England, parts of Wales and parts of Northern Ireland we are in for another sunny day and temperatures responding accordingly.” 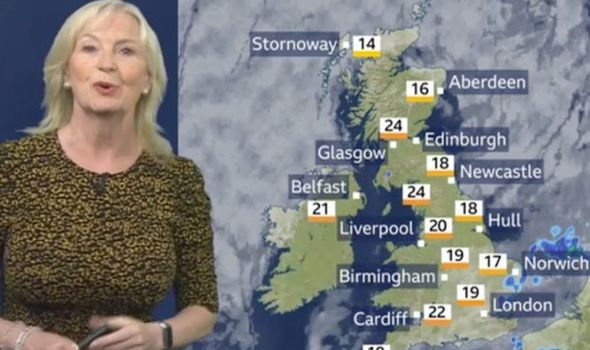 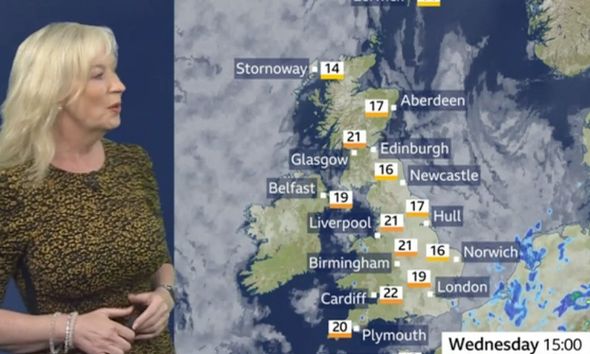 Temperatures will rocket to 24 degrees in Glasgow, 22 in Cardiff, 20 in Liverpool and 19 in London.

But the presenter warned of “high” and “very high” pollen levels across the country on Tuesday.

Ms Kirkwood warned that through Tuesday evening and overnight “we will still have a few showers”.

While heavy cloud is expected to arrive along the east coast of England on Wednesday morning. 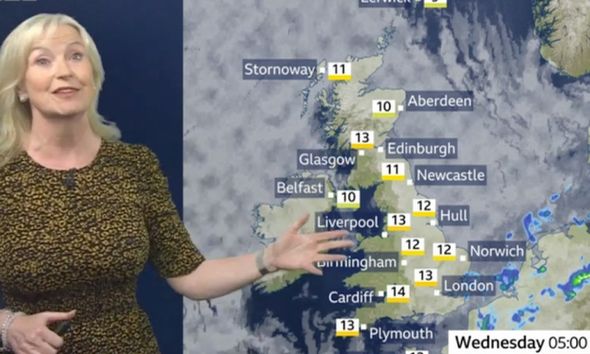 The forecaster added: “Tomorrow we start off with all this cloud across central and eastern areas, some showers coming in through the course of the day.

“But we are looking at brighter skies out towards the west with highs up to 22 degrees.”

Wednesday will see temperatures drop slightly to 22 in Cardiff, 21 in Edinburgh, 20 in Plymouth, 19 in London and 17 in Aberdeen.

She added: “Then the low pressure that has been bringing us all this cloud and some showers starts to push away towards the near continent.” 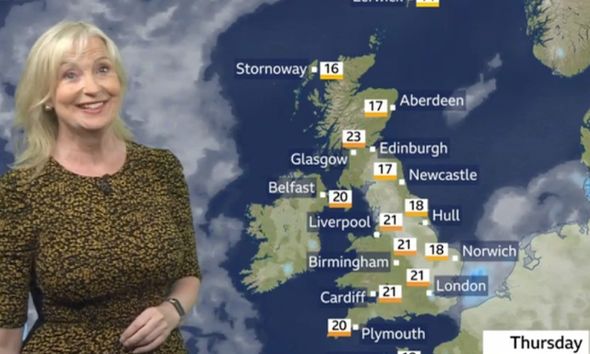 But Kirkwood warned this area of low pressure could still bring the “odd shower” on Thursday.

She added there also could be a bit more cloud in eastern areas as well.

Out towards the west of England Ms Kirkwood said the weather will be “drier” and “brighter with a bit more sunshine”.

Thursday will see highs of 23 degrees in Glasgow, 21 in Liverpool, 21 in London and 20 in Plymouth.