BBC Weather’s Carol Kirkwood warned a bitterly cold arctic front will make its way south through the UK on Monday as Britain is gripped by falling temperatures. Snow showers and winds will pick up as we head through Easter Monday and Britons will have a frosty night into Tuesday while Scotland could see two inches of snow. Tomorrow will feel much colder than the thermometers say and ice is expected on the roads. Temperatures will rise briefly on Wednesday before plummeting again towards the end of the week.

Ms Kirkwood said it will be “cold by day but also by night” as Britain enjoys the Bank Holiday Monday.

She added: “Snow showers are in the forecast and blizzards across Northern Scotland.

“We’ve got this cold front sinking south and behind it, it’s opened the gates to arctic air, so bitterly cold snow showers with north/northwesterly winds.”

The weather presenter warned not to be fooled by the mild weather early today as this will fade by midday on Monday as the south grips for the cold Arctic front. 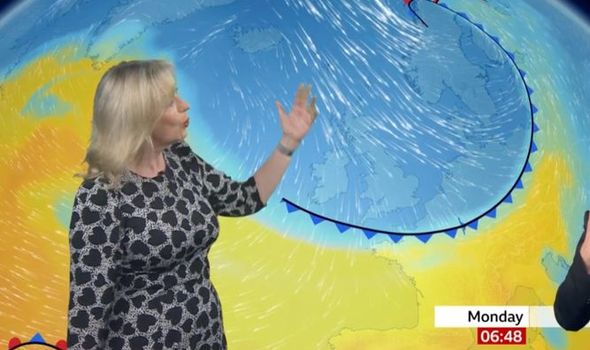 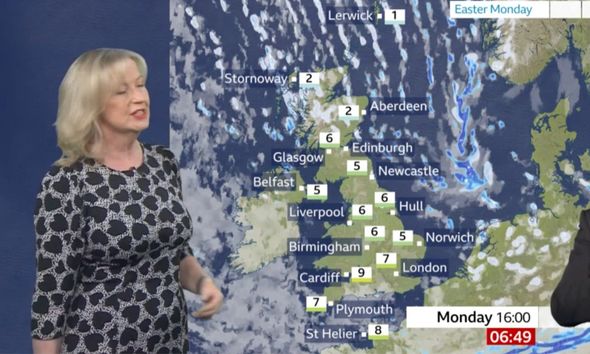 Ms Kirkwood said: “As the weather front continues to journey south this morning, eventually clearing the south of England, we will all be bathed in cold weather.

She warned high winds will push through the U.K. as we head into Monday evening.

She added: “It will feel more like minus 4 in Aberdeen, and freezing in Norwich” 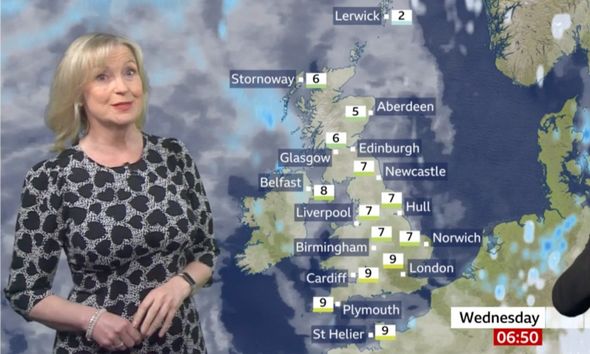 An astonishing 70 mile an hour winds will be in the far north of Scotland.

It’s going to be a widespread frosty night with also the risk of ice on untreated surfaces.

Temperatures will plummet to -6 in Scotland, -5 in Northern England and -3 in South Western areas as Brits wake up on Tuesday morning.

Gardening: Weather guru warns gardeners not to plant tenders until May [DETAILS]
Weather guru on This Morning warns of wet summer ‘We’re in for a soak’ [VIDEO]
Snow forecast: Chart shows snow covering WHOLE of UK on Easter Monday [INSIGHT] 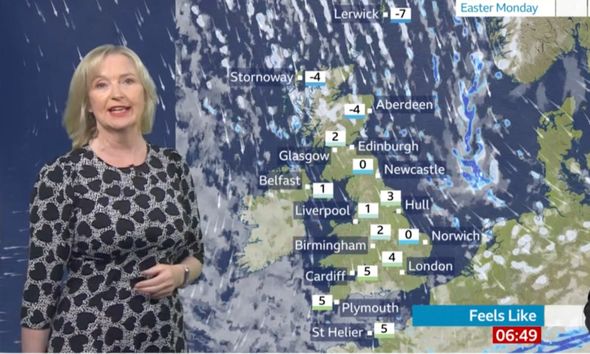 “Tuesday will start off with lots of sunshine but could prove to be much cooler than today.

Ms Kirkwood warned temperatures will plummet and “will feel colder than the thermometers say.”

But as we move into Wednesday morning temperatures recover a little bit.

But as the week wears on temperatures are set to plummet again on Friday.