The BBC Weather meteorologist noted temperatures will be slowly slipping away as the week progresses, with chances of rain growing exponentially after an initially dry start. Carol Kirkwood said cloud will be difficult to shake off for many northern and western England counties, as well as Scotland. Ms Kirkwood said: “It is a chilly start if you’ve got clear skies. There will be sunny spells but if you’re in the north and the west of the country, there’s also quite a bit of cloud.

“And that cloud will be thick enough for some drizzle today, particularly in the coasts and the hills but you can see, across southern areas out toward the east as well, that’s where we will see the large share of the sunshine.

“A bit more cloud bubbling up through the course of the day. Temperatures 8C in Lerwick to 14C in London.”

Ms Kirkwood said temperatures will remain stable overnight thanks to the cloud but warned the high pressure that kept conditions steady in the past week will be pushed away from Tuesday giving way to a new weather front from the Atlantic.

She continued: “Through this evening and overnight, if anything, there will be more cloud around so not as cold a start of the day tomorrow morning as this morning for some of us.

LATEST: BBC Weather: Europe braced for ‘snow and blizzard threat’ across parts of the continent 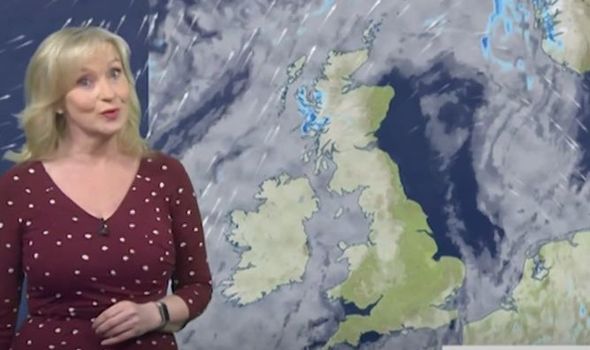 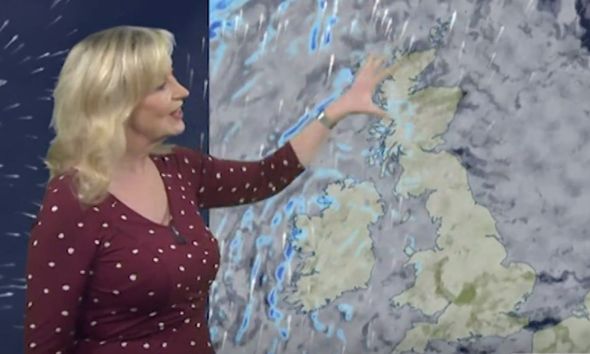 “Still a fair bit of cloud and drizzle in the west in particular, and some showers also.

“As we head into tomorrow, the high pressure that’s been dominating the weather for the past week slips off into the near continent, a weather front coming in from the Atlantic.

“A lot of cloud to start the day tomorrow, some drizzle and then in comes this Atlantic front bringing some rain into Northern Ireland and western Scotland.”

Wednesday will see a band of cloud and drizzle that will move south-eastwards from Wales and the Midlands in the morning to southeast and East Anglia in the afternoon. Behind this band, there will be plenty of sunny spells. Showers in the north-west. Thursday will see sunshine and breezy showers. 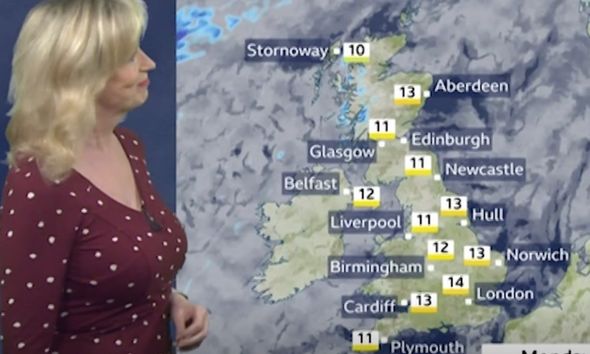 The BBC Weather long-term forecast warned conditions will grow more unsettled as the week progresses, with the weather expected to turn “stormier” ahead of the weekend.

The forecast read: “From Friday and into next weekend, it will likely turn a bit stormier as low pressure drifts nearer to the country.

“This will bring some stronger winds and scattered showers with a few pulses of heavier rain.

“Wintry showers are likely for parts of Scotland too as some colder air from Iceland arrives from the northwest. 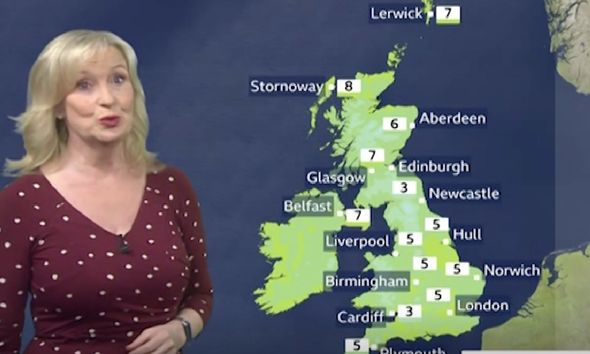 “Confidence is high for the broad weather pattern next week. Although as is typical with the nature of low-pressure systems, the daily specifics may shift around slightly.”

BBC meteorologists are expecting the weather to remain unsettled through the final week of March and the start of April as well.

High pressure building up to the southwest, near the Azores, is forecast to play a major role in deciding of the UK will fare at the beginning of next month.

The weather service added: “As we are sat between these two high pressure systems, lower pressure is expected for the UK and the storm track is likely to remain influential over Northwest Europe.

“This means it will likely continue to be wet and windy as weather fronts sweep in from the west or northwest.”