BBC Weather forecaster Carol Kirkwood urged Britons in Aberdeenshire and in the Northern Isles to look up overnight, as temperatures will fall below freezing levels for most in the east. She said: “You could see some slippery surfaces in Northern Ireland and Wales before the cloud builds and then we see the rain. Meanwhile, it shall remain in the east which is a way behind that brighter skies and sunshine – showery rain in the east. Temperatures 6C to 9C or 10C.

“Yesterday, in parts of Norfolk, temperatures struggled to break freezing so that will be a difference for you.

“Whichever way you dress it up, it will still feel cold if you are out and about.

“This evening and overnight we start with some clear skies in the east, where we have the cloud coming across. The weather front from the west will move east and then sink down towards France.

“Where we have the cloud and the rain, we are looking at some pictures overnight, 6C to 8C.

“Under clearer skies, the temperatures will be lower. 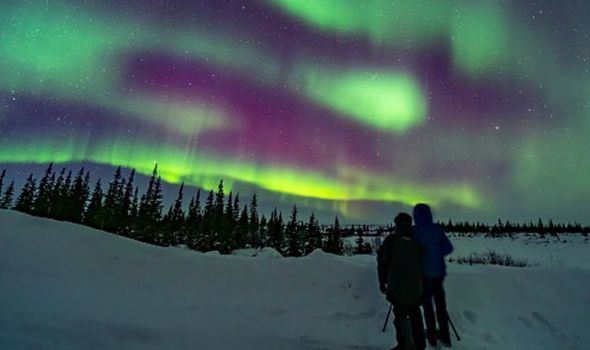 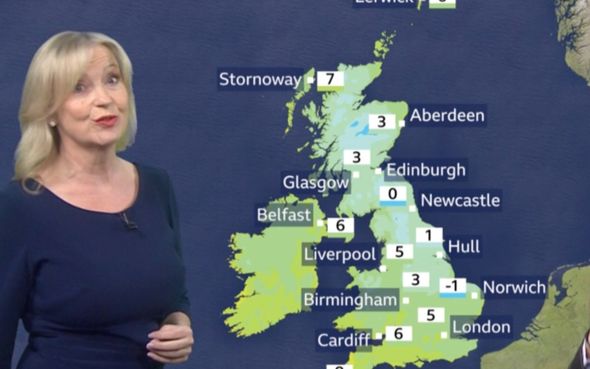 “If you are interested in the northern lights, there is a chance you could see them across the Northern Isles and Aberdeenshire.

“Elsewhere, probably a bit too much cloud in the east but worth having a look, you might just be lucky.”

A bitterly cold front from Greenland will sweep snow and freezing fog over the UK this week. Temperatures are expected to plunge to sub-zero lows of -1C tonight in western Scotland, with most of England staying in single figures of 1C as far south as London and Southampton, according to WXCHARTS.

And the latest snow probability models show central Scotland is likely to be hit with a 50 to 70 percent chance of snow this week as the charts turn a mixture of orange and purple.

The days leading up to Christmas look set to be the coldest, with a minimum of -3 degrees forecast on Dec 22 and Dec 24.

One forecaster said this period of cold weather could last well into the new year.

He told Express.co.uk: “I think it will be cold this Christmas, which will people keep on their toes.

“It could continue to stay cold until February.”

He said: “It is quite magical to see snow is not off the agenda this year. Britain is a big place so widespread snow is unlikely.

“Northern cities like Glasgow or Edinburgh in Scotland have the most chance of snow until Christmas, but not southern areas like London.

“In order for widespread snow to hit, we will need to get northerly flows from the Arctic in our direction, but we usually get Atlantic and Siberian flows.” 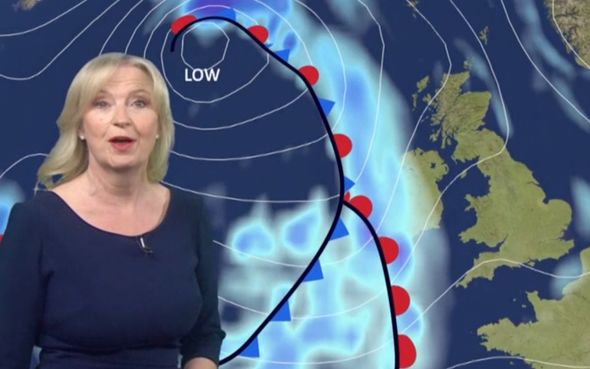 Netweather’s Terry Scholey added the UK will remain cold due to a slow-moving depression over Scotland.

He said: “A large anticyclone over Russia is blocking Atlantic systems, with a slow-moving depression over Scotland filling over the next few days.

“So it’ll remain on the cold side in the East while fronts make some progress, with a more vigorous Atlantic depression by Friday eventually allowing milder air to move in from the South West.

“Blustery winds around the periphery of the low over Scotland will make it feel cold, with gusts of 45 to 50mph from the North or North West in the West for a time.

“Northern Ireland will also be quite breezy, but with much lighter winds towards East Anglia and the South East.

“Top temperatures 6 to 9C over Scotland and 4 to 7C elsewhere, but it’ll be colder than this where fog is slow to lift and clear.”

The Met Office’s long-range forecast between Monday, December 21 to Monday, January 4, hinted wintry weather may stick around until the new year.