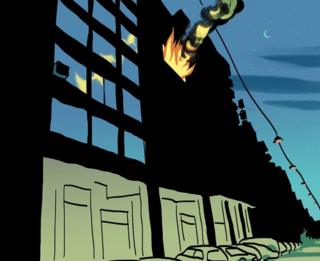 It was a warm spring afternoon in March 2018. Language classes had just finished for the day at the Afghan community centre in the heart of Athens. The one remaining staff member popped out for lunch, locking the front door behind him.

A while later as he wandered back he smelt burning. “Your building’s on fire!” a neighbour shouted. Rushing back, he saw flames shooting from the windows.

The centre had been targeted in an arson attack. No-one was hurt, but the computer system and essential files were destroyed.

Two years on, that race attack is one of 100 that have been illustrated by 50 different artists and plotted on a digital map, which you can access online.

“Many people stopped coming because they were scared,” says board member Mohammed Mirzay. The centre connects Afghan migrants with essential services such as translation, and is currently helping the community navigate the coronavirus lockdown.

“We were particularly worried about the women and children who usually visited us.”

This was not the first attack the Afghan centre had seen. In 2010, its former president was beaten up by a neo-Nazi gang outside its old premises.

Members had also received death threats by phone and letter. “It was scary, but what can we do?” says Mohammed Mirzay. “We had to carry on because people need us.”

Today, the building lies empty and the community has premises in a different neighbourhood. The only sign left of the attack is a white square with a QR code in the middle.

Scan it using your phone, and a comic illustration by local artist Giorgos Gousis pops up, showing the building on fire.

It’s part of X Them Out, a creative project documenting racist violence throughout Greece. The illustrations have also been collated into a book and a touring exhibition.

“Racist attacks are usually wrapped in silence,” says Electra Alexandropoulou from the Rosa Luxemburg Foundation in Greece, which worked on the project with the Racist Violence Recording Network (RVRN) and human rights organisation 360.

“We want to make everyone understand that in the streets where we walk, talk, kiss and embrace, there was once bloodshed.” Many victims do not have papers and fear being deported if they report attacks, she adds.

Neo-Nazis on trial in Greece

In the years following the financial crash of 2008-2009, Greece saw a wave of attacks against migrants.

Many were linked to the neo-Nazi Golden Dawn party, which in 2012 won 18 seats in the Greek parliament.

According to RVRN, there was an “immense increase” in racially-motivated attacks from January to September that year, with many witnesses reporting attackers wearing Golden Dawn logos.

A group called Crypteia, which admitted carrying out the attack on the community centre, is thought to be affiliated to Golden Dawn.

Since 2013 the party’s leaders have been on trial, accused of running a criminal organisation, with the verdict expected later this year. X Them Out aims to keep the trial at the forefront of Greek minds.

Most attacks were carried out at night with few witnesses and many victims have since left the country, so artists created images based on the activist network’s records.

“I had heard of this case but I didn’t know many details,” says Alexia Othonaiou, who illustrated the 2013 murder of 27-year-old Pakistani labourer Shehzad Luqman.

“I didn’t know he was stabbed in the back while cycling.”

While going through media coverage of the attack she was struck by the words of Luqman’s mother, whose reaction was: “But people don’t do such things.”

“She just couldn’t believe someone could do this to her son,” says Othonaiou. “It really touched me. So I decided to illustrate the story from her perspective.”

Exhibitions have taken place in Athens, Crete and Lesbos and there are more planned once the coronavirus lockdown is lifted, including in Thessaloniki and Volos. All proceeds from the book go to the trial lawyers who are working without fees.

According to RVRN, racist violence has decreased over the last few years thanks to the disruption of Golden Dawn’s activities by the trial and better policing.

However, the number of attacks picked up last year and early in 2020 as new migrants arrived in Greece. Alexandropoulou is hoping to add some of these to the map.

“People have been very touched that we are taking such notice of this issue,” she concludes. “But more needs to be done to stop these attacks happening.”