After a year spent drifting across the top of the world, frozen in sea ice, a German research ship returned home on Monday, ending the largest Arctic science expedition in history, one aimed at better understanding a region that is rapidly changing as the world warms.

The ship, the Polarstern, docked at its home port of Bremerhaven nearly 13 months after it left Norway. In October, it became deliberately frozen into the ice north of Siberia, about 350 miles from the North Pole, and drifted north and west for thousands of miles, leaving the little remaining ice for good late last month between Greenland and Norway.

The expedition, with a rotating contingent of about 100 scientists, technicians and crew, encountered nosy polar bears, fierce storms that damaged equipment, thin ice conditions and, most critically, the coronavirus pandemic that scrambled logistics. There were also accusations of sexual discrimination and harassment aboard a Russian support ship that accompanied the Polarstern for the first month.

But the leaders of the $150 million project, known as Mosaic and organized by the Alfred Wegener Institute in Germany with participants from 19 other countries, noted it as a success. They said the reams of data collected about the ocean, ice, clouds, storms and ecosystems of the Arctic would prove invaluable in helping scientists understand the region, which is warming faster than any other part of the planet.

“While we faced many challenges during the year, Mosaic has been very successful in collecting an unprecedented data set from within the rapidly changing Arctic sea ice,” said Matthew Shupe, a co-coordinator of the expedition. Dr. Shupe, a research scientist at the University of Colorado, was speaking from Germany, where he was awaiting the ship’s arrival. The data “will play a major role in advancing Arctic research over the coming decade,” he added. 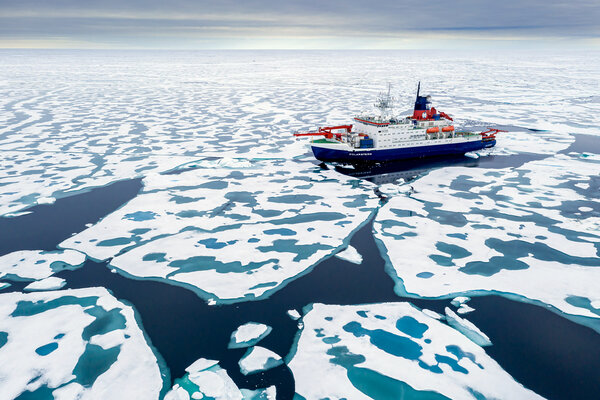 The region’s sea ice has been steadily shrinking in recent decades, and ice coverage this year was the second lowest since satellite measurements began in 1979. Warming has also caused sharp declines in older, thicker ice.

Dr. Shupe said the ice floe that the Polarstern had been frozen into for most of the year broke up on July 31 in spectacular fashion. For two days, he and his colleagues had watched as the floe, already much smaller than when the expedition began, kept shrinking, its southward edge melting and getting closer and closer to the ship.

“We were getting a little nervous,” he said. So on July 30, they removed the last remaining equipment from the ice.

“And then we woke up the next morning and our ice floe was in a thousand pieces,” he said.

Dr. Shupe’s second tour on the Polarstern began in June, when he arrived with a group to replace the scientists and technicians who had been on board since late February. The swap had been scheduled to take place in April, but the pandemic intervened.

Because of restrictions on travel and the need to quarantine participants in order to keep the expedition free of the virus, a planned transfer by aircraft was scrapped. Instead, in late May, the Polarstern left its ice floe to rendezvous with two smaller ships carrying Dr. Shupe and others off the Norwegian archipelago of Svalbard. The Polarstern then headed back to the ice.

Abandoning the floe for nearly a month affected some of the research, the expedition’s leaders said at the time. But many autonomous instruments kept collecting data during the ship’s absence.

Carin Ashjian, a biological oceanographer at the Woods Hole Oceanographic Institution in Massachusetts, was among those who left Norway for the Polarstern in late January, before the coronavirus outbreak became a pandemic, and was on board two months longer than planned.

“Who knew when we went up there that life was going to take such an astoundingly strange turn?” said Dr. Ashjian, who studies small marine organisms called zooplankton.

As the days dragged on, she said, morale suffered. “It’s not just that we were there for longer,” she said. “The world outside was going through this immense upheaval. Everyone on the ship had different situations back home. Some people were really, really worried.”

But the Polarstern had internet access and satellite phones so those on board could email and talk to loved ones regularly.

Jennifer Hutchings, a sea ice researcher at Oregon State University who was on the Polarstern at the same time, said she had learned from previous polar work that “you always have contingency plans” because weather or other problems could delay departure for a week or two.

“But this one — this was an interesting experience,” she said. “It was more stressful for knowing our family and friends were going through a hard time.” She talked to her 12-year-old son back home for five minutes every day, she said.

Because the Polarstern remained free of the coronavirus, Dr. Ashjian said, “we were in our safe bubble, living a normal life,” one that included breakfasting elbow to elbow and socializing in common rooms in the evenings.

Dr. Ashjian said she would occasionally remind her colleagues that things would be different when they eventually returned home. “I would look around at people and say, You know, we’re not going to be able to do this,” she recalled.

Last month, a journalist who was on board a Russian support ship, the Akademik Fedorov, wrote about accusations of harassment of women during the voyage and the establishment of a dress code that appeared to be aimed at women as a response to the harassment. The journalist, Chelsea Harvey, who traveled for the first six weeks of the expedition along with scientists, technicians and some graduate students, also said there were issues of gender equity on board.

Dr. Shupe said that while he had not been on the Russian ship, “I’m well aware of what happened on the Federov.” He described the events as “really unfortunate.”

Dr. Shupe said the Polarstern “had a structure in place to prevent that.” He acknowledged that gender balance had long been a problem in science, but said that during his time on the Polarstern that wasn’t an issue, with a nearly 50-50 split between men and women on the scientific team.

“We had this pretty amazing balance of men and women, which contributed to a very smooth operation,” he said.

Dr. Hutchings and Dr. Ashjian said they hadn’t heard of any similar problems aboard the Polarstern.

“I found it upsetting that that happened on the Federov,” Dr. Hutchings said. “And knowing cultures on different ships, these things do happen. But I didn’t experience anything along those lines in my five months at sea.”

“I was on board with a wonderful group of people, and that includes the crew,” Dr. Ashjian said. “It was exciting and exhilarating, but also exhausting. And a little overwhelming.”