Cliver Alcala, an outspoken critic of Maduro for years, has been charged over alleged ‘narcoterrorist conspiracy’. 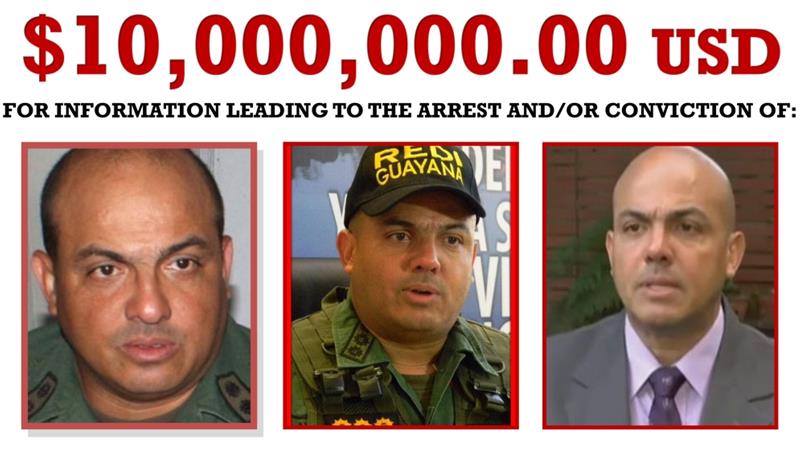 A retired Venezuelan army general indicted alongside Nicolas Maduro has surrendered in Colombia and is being taken by Drug Enforcement Administration agents to New York for arraignment, four people familiar with the situation told the Associated Press on Friday.

Cliver Alcala has been an outspoken critic of the Venezuelan president for years. But he was charged on Thursday with allegedly running  a “narcoterrorist conspiracy” with Maduro, socialist party boss Diosdado Cabello and another retired army general. United States prosecutors allege they sent 250 metric tonnes of cocaine a year to the US and turned the Venezuelan state into a platform for violent cartels and Colombian rebels.

The US Justice Department had offered a $10 million reward for Alcala’s arrest.

Alcala was being flown on a chartered plane to the US from Barranquilla, Colombia, after waiving an extradition hearing and agreeing to collaborate with prosecutors, said the four people, who spoke on the condition of anonymity to discuss actions that had not yet been made public.

Alcala has been living in the coastal city since fleeing Venezuela in 2018 after the discovery of a conspiracy that he was secretly leading in hopes of ousting Maduro.

After being indicted on Thursday, Alcala shocked many by claiming responsibility for a stockpile of US-made assault weapons and military equipment seized on a highway in Colombia for what he said was a planned incursion into Venezuela to remove Maduro.

Without offering evidence, he said he had a contract with opposition leader Juan Guaido and his “American advisers” to purchase the weapons.

“We had everything ready,” Alcala said in a video published on social media. “But circumstances that have plagued us throughout this fight against the regime generated leaks from the very heart of the opposition, the part that wants to coexist with Maduro.”

The confusing remarks from someone who was among Maduro’s loudest critics were seized on by Venezuela’s socialist leader, who accused the DEA of being behind a plan by Alcala to assassinate him and other political leaders.

According to the indictment, Alcala in 2008, when a trusted aide to then-President Hugo Chavez, was given additional duties to coordinate drug shipments with corrupt elements of the Venezuelan military and guerrillas from the Revolutionary Armed Forces of Colombia, which the US listed as a terrorist group.

The DEA did not respond to an emailed request for comment. Nicole Navas, a Justice Department spokesperson, declined to comment.

Moments before his surrender, Alcala published a video on social media bidding farewell to his family.

“I face the responsibilities for my actions with the truth,” he said.